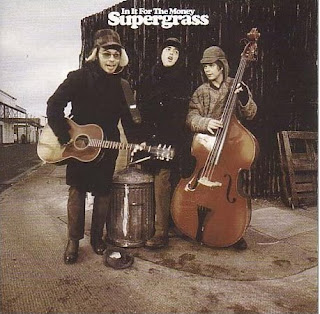 A regular feature, where I present something I actually wrote several years ago. It takes its name from a line in a sketch Dave Drazin wrote for the Famous In The Future comedy group. This time out, it’s a review of the 1997 Supergrass release, In It For The Money, that was published in the Illinois Entertainer.

It’s always a pleasant surprise when a band follows a promising debut with an album that not only avoids the sophomore jinx but actually surpasses the first effort. Such is the case with Supergrass, the British trio that served up a smorgasbord of classic rock references with last year’s I Should Coco. Although In It For The Money lacks the immediate ear candy appeal of its predecessor, ultimately it’s more satisfying and mature.

Mature seems like an odd term to describe the lads of Supergrass, who gleefully mimicked The Smurfs on Coco’s “We’re Not Supposed To,” but it fits. Songs like “Sun Hits The Sky” and “You Can See Me’ sport the band’s irresistible melodies, but the arrangements show greater depth and texture. Supergrass may get caught shoplifting from Cheap Trick on “Tonight,” but they take the song in a bold new direction by adding festive horns.

“Cheapskate,” the designated first single, is a high-speed thrill ride, and the guitar assault of “Richard III” is augmented with haunting keyboards work. In It For The Money delivers on the slower material too. “Hollow Little Reign” has a theatrical flair that evokes Sgt. Pepper’s Lonely Hearts Club Band, while “Late In The Day” and “It’s Not Me” are touching ballads. The funhouse atmosphere of “Sometimes I Make You Sad” acknowledges that the band still has a goofy side. Supergrass may be in it for the money, but they make things fun for the rest of us.