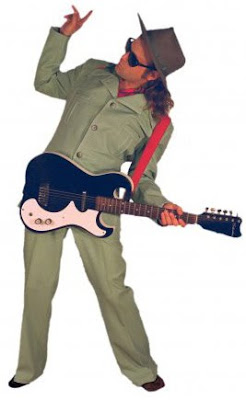 Picture of Ellis Clark taken from his Facebook page.

Another buffet of entertainment snippets for a Friday.

The Ellis Clark SuperGroup at Viaduct Theatre March 6th I first met vocalist Ellis Clark back in the late 1980s when I did a Streetwalkin’ profile on his band Social Act for the Illinois Entertainer. Clark played a melodic brand of hard rock in that group, but he also founded the power pop/punk outfit Epicycle, which still performs from time to time, and he’s done a lot of producing for other artists. These days, Clark is probably most active as the keyboards player-guitarist-back up vocalist for The Handcuffs. On March 6th, at 10PM, he has something special going on at The Viaduct Theatre in Chicago. That’s when The Ellis Clark SuperGroup hits the stage, as part of a Chicago Acoustic Underground sponsored triple bill. Clark has put together an impressive line-up that includes drummer Brad Elvis of The Handcuffs; bassist Jon Brant, who played with Cheap Trick, as well as d’thumbs; sax player Mars Williams, who has worked with the Psychedelic Furs and several other bands; power pop veteran Phil Angotti; The Chamber Strings piano player Carol Engelmann; and percussionist Jim Hines. Special guests include guitarist Alfonso Ponticelli and The Handcuffs vocalist Chloe F. Orwell. It will be interesting to what these guys come up with. Clark has created a promo film, which can be viewed on YouTube. Also on the Chicago Acoustic Underground bill that night are Goodbyehome, a folk rock ensemble Clark has been known to collaborate with, and acoustic pop/folk artist Dawn Xiana Moon.

Possible Twigs Reunion? One of my very first Broken Hearted Toy posts last August concerned singer-songwriter Linda Good. She moved to Los Angeles 10 years earlier to pursue a solo career, and was visiting her old home town for a show at the Uncommon Ground on Chicago’s north side. At one point during that performance, Good called her sister up to the stage. It was a sort of reunion of The Twigs, the popular band Linda and Laura had founded years earlier. The Twigs had recorded two full CDs; the promising Bring Me The Head Of Eternity and the more polished The Universe Tonight, which found them successfully covering a variety of styles, from the sunny pop of “It’s Alright” to the hip hop of “Lucky.” Now, about six months later, Linda Good is reporting on Facebook that she and Laura are recording a new Twigs single together. Or as she dubbed it, a Twingle. Hopefully, she’ll keep fans posted as to its release date.

M.A.S.S. Appeal at Angel Island As its current production of Andrew Case’s emotionally charged cop drama Rant clearly illustrates, the Mary-Arrchie Theatre Company has established a reputation for cutting edge work. Now the group’s Angel Island space at the corner of Broadway and Sheridan Road in Chicago is also a great place to discover new musical artists. With M.A.S.S. (Mary-Arrchie Sound Series,) the group will present live electro, rock, and hip hop music. Acts who have already performed include Ol’Boy, an indie rock band that claims The Temptations and Tom Waits among its influences; Americana/punk singer-guitarist Garrett Santora; indie rock duo LionLimb; and cutting edge singer-keyboards player Natalie Grace Alford. Artist-In-Residence Ol’Boy will be a frequent M.A.S.S. participant, with shows on March 10th with The Ours, and The El is a Sound of Joy; with Merryweather and Teenage Rage on March 22nd; with Granny Frost and The Dirty Diamonds on April 12th; and with Audio and a special guest on April 19th. M.A.S.S. is also hoping to snag touring bands who might want to use the space for after-show or acoustic gigs. Portions of the proceeds from these shows will help fund the Mary-Arrchie, which is a non-profit theatre company. Acts looking to be part of M.A.S.S. can contact Carlo at info@maryarrchie.com

Hey Terry, would it be possible the get a copy of the Social Act piece that you did for the Illinois Entertainer?

Rob: Thanks for your comment. You can contact me through my gmail account. If you give me an email address, I could probably send a pdf of the article to you. Or if you prefer, I could mail a copy to your home address. - Terry