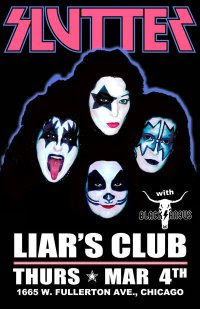 Forget that Kiss/Mini Kiss Dr. Pepper commercial on Super Bowl Sunday. In fact, forget all the Super Bowl ads. There’s a new Kiss in town, or rather a Kiss Tribute band. It goes by the name of Slutter, which is just part of the wordplay this group uses to convey that all of its members are female. Gina Knapik performs as Doll Stanley, Jennifer San Juan is Peterless Criss, Susie Winn is Ace SHEley, and Chloe F. Orwell is Tiny Gene Simmons. Slutter made its debut a few months back at a charity event and is returning for a show at Liar’s Club in Chicago on March 4th.

Orwell is the only one of these musicians I’m familiar with, although a Google search showed Knapik as the vocalist-guitarist for The Venom Lords, a local act that lists Kiss as well as The Runaways among its influences. Orwell currently fronts The Handcuffs, the indie rock band she formed with husband/drummer Brad Elvis, following their stint with Big Hello. On the surface, it would seem more of a challenge for Orwell to channel a member of Kiss than Knapik, but anyone familiar with Orwell knows she’s no shrinking violet.

Kiss may not have made in into The Rock And Roll Hall Of Fame this year, but at least a quartet of women in the Windy City are carrying on its hard rocking legacy. The March 4th gig apparently coincides with Peterless's birthday, and the band promises to spring some fun surprises on the audience. Black Angus, an AC/DC tribute band is also on the bill that night. I’m assuming they’re all guys. Liar’s Club is located at 1665 W. Fullerton Avenue.