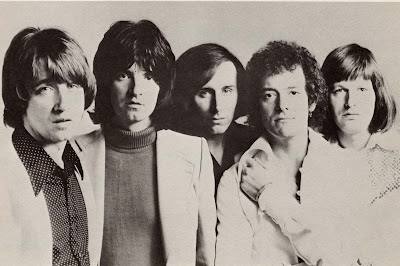 “That stuff is almost hidden from view, people don’t know it exists. It almost makes me cry when I say to people, never mind the singles, have you listened to the albums? Because there’s some magic stuff on there.” - Hollies bass player Bernie Calvert

“What Went Wrong” The fatal flaw of the Orchestral Hollies compilation, which was released in 2000, is that it almost entirely ignored the band’s mid-1960s experimental work in favor of much later, much safer material. Graham Nash’s delicately beautiful “Butterfly” was the only song chosen from his tenure with the band, other than a cover of Bob Dylan’s “Blowin’ In The Wind.” One of the several glaring omissions on Orchestral Hollies was “What Went Wrong,” a rollicking number with accompaniment directed by Mike Vickers, that appeared on the 1966 Stop Stop Stop (For Certain Because - - - in the UK) album. I stated in my last round of Hollies album tracks that Stop Stop Stop might have been The Hollies’ finest moment, and “What Went Wrong” provides additional evidence. The song kicks off with thundering kettle drums and a blast of horns, before Allan Clarke sings, “If you could look my way, you’d know that I exist” in his signature vocal style. He remains impressive throughout the song, particularly on the highly melodic lines, “You be the only reason that I’m leaving town/You be the only reason I’d come back for one more day, I’d come back and maybe stay, if I could find out what to say to you.” The arrangement, anchored by Bobby Elliott’s steady drumming, is reminiscent of the Tom Jones hit, “It’s Not Unusual.” “What Went Wrong” is pure 1960s, but it stands the test of time.

“Leave Me” In the U.S., “Leave Me” appeared on the Dear Eloise/King Midas In Reverse album, and its position directly after the orchestrated fairy tale “Butterfly” indicates just how adventurous The Hollies were in those days. Of all the songs in the band’s catalog, this is the one that would probably fit best on a Nuggets compilation, since it’s a hard-hitting bit of garage rock. Furthermore, “Leave Me,” with its energetic guitar and organ arrangement, is a great example of how to create a nonviolent break-up song. There’s a long-standing, though thoroughly inexcusable school of thought in rock ‘n’ roll that if a woman breaks a man’s heart, he has the right to murder her (“Hey Joe,” “Delilah,” “Run For Your Life.”). Other songs, like The Rascals’ “I Aint Gonna Eat Out My Heart Anymore” or Shoes’ “I Don’t Miss You,” offer a more sensible solution: Kill the relationship, not the partner. For all its anger, “Leave Me” falls in the latter category. “Pack all your things and get out of my sight,” Clarke tells the lover who’s cheated on him. “Your love was made of sand, I’ve had all I can stand, leave me.”

“Promised Land” I haven’t been able to track down the source of a quote I distinctly remember reading that said The Hollies would never sing about the war in Viet Nam. The writer’s point (made sometime around the late 1960s or early 1970s) was that The Hollies just concentrated on making good music and didn’t worry about such things. By the time Distant Light was released in 1972, The Hollies were dabbling in rougher material, and on the song, “Promised Land.” they sounded pretty concerned about the war. Borrowing a page from Crosby, Stills, Nash & Young, guitarist-vocalist Tony Hicks and his non-band member writing partner Kenny Lynch unleashed a hard rock protest song. Opening with some Beach Boys style harmonizing, “Promised Land” shifts into a more serious mode as vocalist Clarke begins his search for the title location. “It can’t be found in Viet Nam/It can’t be where the Israelites planned it/If we want peace for every man/We’ve got to make the world demand it.” The lyrics go on to state, “We must bring back the soldier boys, we mustn’t let them die for nothing.” The song ends with Clarke, Hicks, and guitarist-vocalist Terry Sylvester singing, “Bring them all back home” while Hicks cuts loose with some of the fiercest guitar licks of his career.

"Leave Me"...the greatest Hollies tune that Paul Revere and the Raiders never recorded. I think of Mark Lindsay singing this everytime (Like Everytime Before?) I hear it!