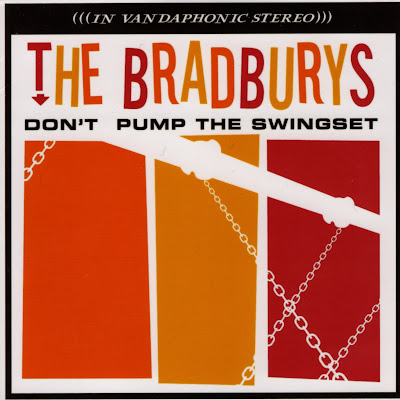 The Bradburys’ recently released Don’t Pump The Swingset was actually recorded some time ago, having been one of the last projects produced by Jeff Murphy of Shoes at Short Order Recorder before the facility closed down. The E.P.’s five songs and three bonus tracks typify a power pop band that has been fascinated with unrequited love ever since some of its members performed in an earlier group called The Steppingstones. Clever lyrics bring these believable romantic tales to life, and having all four band members sing results in some sophisticated harmonies and vocal arrangements.

The flighty title character of the energetic “Mary Goes Around” is so busy bouncing from one boyfriend to another she might as well be a galaxy away from the guy who believes he’s the one for her. Closer to home, the appealing 1960s style pop of “She’s From Liverpool” deals with a fashion-conscious young lady who listens to E.L.O. and seems destined to be become a superstar. On the punchier “Perfume Counter Girl,” The Bradburys blend garage and psychedelic rock while describing an enticing retail employee who attracts more admirers than customers.

The high-speed “Shout It!” presents the unbridled joy of a guy who actually finds a true relationship. When the back-up vocalists ask, “Is she the real thing?” the lead singer responds, “Yes, I’m sure she is,” and declares he’ll go out of his mind if he doesn’t kiss her. “My Big Hello” is another power pop gem that celebrates the thrill of a new romance.

The bonus tracks on Don’t Pump The Swingset offer additional dimensions to The Bradburys’ approach. Bassist-vocalist Jake Blake’s previously unreleased light rock song “Killing Time” is a complete departure from the power pop genre, while “Go-Go,” taken from the Introducing The Bradburys LP, suggests that sometimes physical attraction isn’t so innocent. “I Love It When It Snows” was one of several first-rate original songs on Hi-Fi Christmas, a various artists compilation put together by rhythm guitarist-vocalist Dan Pavelich in 2002 to help fund research for a cure for Willibrand’s Disease.

Now that Don’t Pump The Swingset has been sprung from the vault, The Bradburys are busy working on a full-length CD they hope to release in the near future.