Now Is No Time To Say Good Night 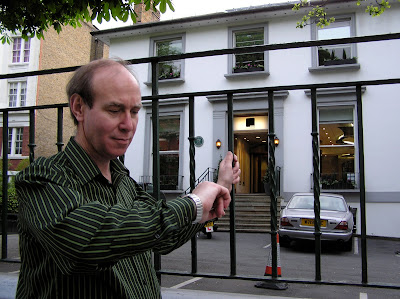 Various media sources, including Paste Magazine, WXRT radio in Chicago, and the TwentyFourBit website are reporting that the financially strapped EMI record label is looking to sell its famous Abbey Road recording studio in London. Ironically, on the same day those posts appeared on Facebook, the French garage rock band The Plastiscines posted a video for “Another Kiss,” showing the four gals on a romp through London that includes posing at the same intersection John, Paul, George, and Ringo walked across on the cover of the Abbey Road album.

All of which brought back memories of when my wife Pam and I stopped by Abbey Road as part of our European Trip Of A Lifetime back in 2006. I had been under the impression I’d be able to visit the same rooms where The Beatles and countless other rock bands recorded their music, but was heartbroken to discover the closest I could get was standing outside the iron gates. We took pictures of the Abbey Road building and the outer white walls where fans had posted hand-written tributes to The Beatles. I wanted to pose in the intersection but was leery of the busy traffic. So unlike The Plastiscines, I cowered by the curb like a first-grader waiting for a crossing guard. Pam snapped the above shot of me, glancing at my watch while standing by the gate. The joke was that I was waiting for The Hollies to show up for a recording session.

I still have a cassette recording I made in 1987 of the syndicated Rock Over London radio show where the announcer reflects on the days in the early 1960s when Abbey Road technicians wore white coats, “and when they had tea, they certainly did it in style. Tea was served by a lady who brought it in on a tray with china cups and saucers.” His observations were based on drummer Bobby Elliott’s liner notes for The Hollies’ compilation, All The Hits & More.

One obvious solution to EMI’s woes would be to open Abbey Road to the public, charge admission, and make sure none of the tourists fiddle with the knobs. TwentyFourBit suggests that Paul McCartney or some other rich musician who recorded at Abbey Road buy it. But whether it’s privately owned or transformed into a museum devoted to Beatlemaniacs, there’s no doubt Abbey Road should be preserved as one the most important sites in rock and roll history.

Index: The Beatles, The Hollies, WXRT