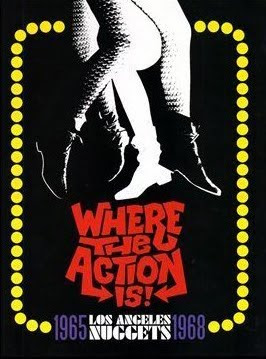 Note: this review originally appeared in the Illinois Entertainer.

Rhino continues to mine the 1960s for its Nuggets series, serving up four handfuls on Where The Action Is! Los Angeles Nuggets: 1965-1968. The set, which comes packaged in a 50-page book filled with photos, graphics, and band profiles, covers the L.A. music scene during a particularly fertile era. For the most part, producer Andrew Sandoval prefers locally released singles over Top 40 hits. The most familiar songs here are alternate takes by the original artists or intriguing cover versions.

Sandoval states that each of the four discs is devoted to particular theme: the club scene; indie bands from the surrounding area; studio producers; and the emergence of folk rock and psychedelia. Those distinctions probably will be lost on the average listener since each CD jumps from one genre to another. Disc Two kicks off with tracks from Thee Midniters and The Bush that foreshadow hard rock, but also includes The Electric Prunes’ psychedelic “Hideaway.” Disc Three offers the jazz-influenced “Montage Mirror” from the Roger Nichols Trio, along with The Knickerbockers’ guitar-driven “High On Love.”

Some of the selections haven’t stood the test of time. Rick Nelson’s “Marshmallow Skies” comes across as silly, and Lee Hazlewood’s “Rainbow Woman” sounds like a watered down version of his more intriguing “One Velvet Morning.” The set works best when it spotlights songs that should have been hits, or unusual material from famous acts. “Listen, Listen!” by The Merry-G-Round and “All Night Long” by The Palace Guard evoke the original British Invasion and The Chymes update the 1960s girl group sound with “He’s Not There Anymore.” An alternate take on “Heroes And Villains” by The Beach Boys is more adventurous than the version they released as a single. There’s a rocking version of “Last Night I Had A Dream” by Randy Newman that he disowned at the time of its release, and a collaboration between Jackie DeShannon and The Byrds on “Splendor In The Grass.” The previously unreleased “Sit Down I Think I Love You” by Stephen Stills and Richie Furay is an acoustic gem, and Warren Zevon impresses with the melodic “(You Used To) Ride So High,” which he recorded under the name The Motorcycle Abilene. Other big names on Where The Action Is! include The Doors, The Monkees, The Turtles, and Buffalo Springfield.