There'll Always Be A New Dawn 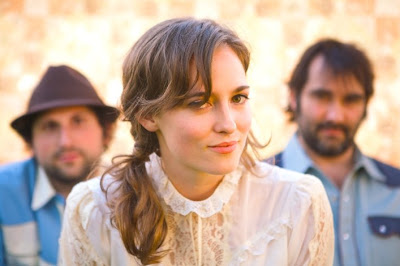 When singer-songwriter Dawn Landes drops by the Beat Kitchen on Chicago’s north side for a show on February 9th, she’ll be promoting her newly released CD, Sweet Heart Rodeo. When I reviewed her last effort, Fireproof, for the Illinois Entertainer in 2008, I didn’t think of Landes as a Country & Western artist. It was hard to pin a label on her eclectic music, and I doubt Sweet Heart Rodeo adheres to any one genre, despite the similarity of its name to a well known C&W record by The Byrds.

In my review of Fireproof, I noted that her poetic observations were set to consistently engaging techno-oriented and acoustic arrangements. The layered vocals and electronic quirks reflected her background as a professional recording engineer.

But I didn’t go into as much detail about the fascinating story behind her song “Bodyguard” as I would have liked. According to the press release, Landes wrote “Bodyguard” within minutes of having discovered that her New York apartment had been broken into. Among the missing items was a laptop commuter that held two years worth of work that was meant to become her next album. Rather than trying to recreate the stolen music, Landes simply started from scratch on another CD. “Bodyguard” was a catchy techno rock tune filled with arresting metaphors about the emotional trauma of being robbed. The best line went, “They stole the subjects of your paintings, but left the canvas on the frame.”

Fireproof showcased Dawn Landes’ penchant of oddball instrumentation and imaginative lyrics, and it’s a safe bet that Sweet Heart Rodeo carries on that tradition. It should be highly entertaining to experience her work in a live setting. Admission is $10.