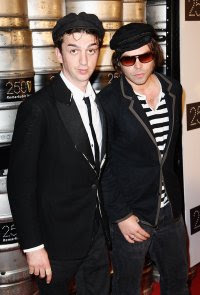 Flavorpill, the online magazine that describes itself as “Your Culture Guide,” heralded the arrival of The Hots Rats in its January 19th Daily Dose e-mail. The duo is a side project comprised of vocalist-guitarist Gaz Coombes and drummer-vocalist Danny Goffey of Supergrass, whose last CD was the highly energetic and enjoyable Diamond Hoo Ha. The Hot Rats take their name from a 1969 Frank Zappa solo album, which is kind of weird because Supergrass and Zappa have little in common stylistically other than a desire to create funny songs.

The Hot Rats’ approach on their recently released, full-length debut Turn Ons is similar to the way Matthew Sweet and Susanna Hoffs cover some of their favorite bands on Under The Covers Volumes 1 and 2. Coombes and Goffey play stripped down, guitar-based versions of songs by Gang Of Four, The Kinks, The Doors, and Velvet Underground, although they do add horns to Roxy Music’s “Love Is The Drug.” There’s a faithful take on Elvis Costello’s “Pump It Up” but The Beastie Boys’ “(You Gotta) Fight For Your Right (To Party)” gets a vintage rock arrangement reminiscent of The Who. Coombes sings like Robert Smith of The Cure on “The Lovecats,” but the tribal drum beat is pure Iggy Pop. The Hot Rats also recorded a very fun video of The Beatles’ “Drive My Car” for YouTube. So far, the only live gigs scheduled are in London and Paris.

I wasn’t even aware of The Hot Rats before being tipped off by Flavorpill, but apparently, they’re already making a name for themselves. The duo has over 2,000 fans on Facebook.