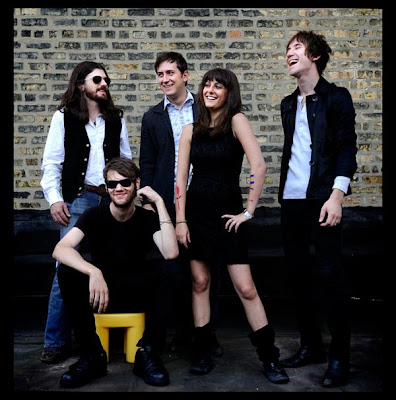 Photo from the Hollus MySpace page.

Here are a few of the more interesting local bands I came across in 2009. Note: These reviews originally appeared in the Around Hear column of the Illinois Entertainer.

Hollus vocalist Jamison Acker describes the band’s goal for its latest release Joker And The Queen as “to make timeless tunes that sounded good in our living rooms,” which translates into evoking Led Zeppelin III and Rod Stewart’s work with The Faces. Acker’s rough vocals and Michael Lux-Saur’s guitars guarantee success, particularly on the acoustic-based “Horseman” and the hard rock stomp of “Fever Song.” There are few slow moments. but overall, this is a solid collection of classic rock.

Section Gang dives into the murky waters of 1980s underground pop on its debut EP, Greater Than Civil. The blend of acoustic and chiming electric guitars recalls R.E.M. while lead singer Kilton Hopkins channels Morrissey with his haunted vocals. The melancholy lyrics are awkward at times, particularly on “Peter Poe,” but on “Patient Pending” and “On The Phone” Section Gang propels its angst via energetic arrangements.

Nathan Xander opts for a vintage folk approach on his latest CD, Fear, building songs on acoustic guitar, harmonica, and his expressive vocals. There’s a touch of Dylan throughout the CD, particularly when Xander spins clever lyrics on “True Love Never Did Run Smooth” and “Martyr’s Song.” “The Alchemist” and “Dark Horses” prove he can also succeed in a more hard rock mode.

Josh and the Empty Pockets pretty much stick to playing fun rock 'n roll on Under The Bed, starting with vocalist/guitarist Josh Solomon's spirited scat singing on the opening number, "Meaningless Words." "Freedom To Be" is a sarcastic take on politics while "Monsters" glances back at childhood memories via a Country & Western arrangement. Solomon also offers the homespun romantic ballads, "Beautiful To Me" and "You're The One."