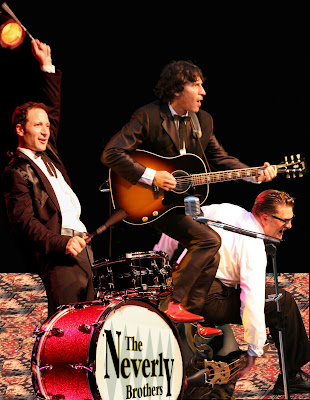 There’s a lot of technology available to teachers these days, but The Neverly Brothers pretty much only needed a small drum kit, an acoustic guitar, and a stand-up bass fiddle for a lesson in rock music history at the Schaumburg Prairie Center For The Arts on Saturday, January 16th. The three musicians made good on a promise to whisk the audience off on a trip to cities like Memphis, Liverpool, and Lubbock, Texas during the formative years of 1955 to 1964. The Neverly Brothers’ show, dubbed A Rock N’ Roll Evolution, was divided into two parts; the first half covered pioneers like Chuck Berry and Buddy Holly, while the second concentrated on the British Invasion.

Guitarist-vocalist Kevin Giragosian provided a brief description of each artist before joining drummer-vocalist Kegham Giragosian and bass fiddle player-vocalist Craig Gigstad for a spirited performance of one of the artist’s songs. Given the set up, there wasn’t a lot of variety in the band’s approach, but the Giragosian brothers and Gigstad kept things buzzing via their highly polished musicianship and singing. The band members take turns on lead vocals, and combine for some beautiful harmonies, particularly on a pair of songs by The Everly Brothers. Charisma plays a major role in The Neverly Brothers’ appeal, with Gigstad in particular charming the audience with his Elvis and Big Bopper impersonations. A big guy who resembles comedian Drew Carey, Gigstad hoisted his massive bass fiddle in the air as easily as if it were a mandolin, and also straddled it like he was riding a Harley, all the while plucking away on the strings.

When it comes to The Beatles and The Rolling Stones, The Neverly Brothers aren’t interested in playing “She Loves You” or “(I Can’t Get No) Satisfaction.” They’d rather underscore how these bands were influenced by American R&B and Country and Western music by presenting The Beatles doing Carl Perkins’ “Matchbox” and The Stones doing Bobby and Shirley Womack’s “It’s All Over Now.” The Neverly Brothers also showed how The Dave Clark Five, The Searchers, The Hollies, and Manfred Mann scored hits by covering material that had previously been released in The States. Kevin Giragosian closed the two-hour show by celebrating the famous guitar riff from The Kinks’ “You Really Got Me.” The bit reminded me of when I saw Ray Davies at Taste Of Chicago a few years back and how the entire audience jumped up in unison at the first few notes of that song.

The Neverly Brothers switch out songs on a regular basis, but they’ve basically been doing the same show for a few years now. It would be fun to see them expand the history lesson to cover the rock-a-billy revival of the early 1980s and bands like The Stray Cats, The Hellbillys, The Polecats, and another trio from Chicago, The Elvis Brothers. Regardless of whether or not The Neverly Brothers change their format, they can always be counted on for a highly entertaining and energetic performance.

POSTSCRIPT: The Neverly Brothers played The Bobby Fuller Four’s “I Fought The Law” as their encore, which brings to mind a story I’ve told at least a hundred times, but never in print. Several years ago, when that song first came out, my younger brother swore that Bobby Fuller was singing, “Hot dogs for lunch and they’re small ones.” To this day, I still have to laugh whenever I hear “I Fought The Law.”

Index: The Hollies, The Kinks, The Neverly Brothers, The Rolling Stones