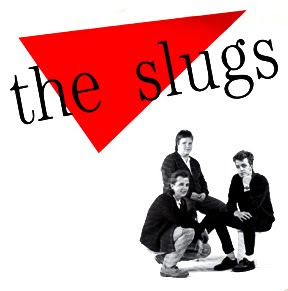 45 record portrait of The Slugs as young men.

The Slugs have been involved with the Chicago music scene in one form or another for over two decades now. Like Frosty the Snowman, group members singer-guitarist Dag Juhlin, bassist-vocalist Greg Juhlin, and drummer Mike Halston sometimes go away for awhile, or appear in the form of another band like Poi Dog Pondering or The Goldstars, but as sure as Chicago turns cold in January, The Slugs have come back to us. There won’t be a parade downtown, but the band will be part of Pravda Records’ 25th Anniversary Bash at The Abbey Pub on Chicago’s northwest side on January 22nd.

The Slugs hadn’t signed on with Pravda yet when they released the 45 “Walking In Circles” b/w “Give Me A Sunday” on Susstones Records in 1986. The A side, with Dag Juhlin’s ringing guitar and rough hewn vocals, was similar to “Do Anything You Wanna Do” by Eddie & The Hot Rods, while the mid-tempo B side sounded like Elvis Costello.

The band’s full length debut, Non-Stop Holiday, released two years later on Pravda, was filled with high-energy power pop/punk gems like “Beat City,” “Big Red Naked Guitar,” and “Romeo Sings A Song.” The Slugs took some time to create a follow-up with Fort Fun in 1992, and it would be another eight years before the CD Junior came out. The Slugs dedicated Junior to Phil Bonnet, who had passed away shortly after co-producing the CD with them.

In my Illinois Entertainer review in 2000, I noted that Junior showcased Dag Juhlin’s continued growth as a songwriter. “Margaret” mixed acoustic and electric guitars in an energetic country-flavored arrangement while the even more adventurous “Little Rusty” incorporated wicked slide guitar into a hard-edged satire of a media-hyped rock star. “Slide” and “Neverland” found The Slugs in more familiar territory, cranking out high velocity pop songs with great melodies.

The Slugs promised on a recent promo video on Facebook that they would play all their fans’ favorites at the Pravda Anniversary Show at The Abbey. And you can’t complain about The Service, another veteran punk/power pop band who’ll be helping Pravda celebrate its anniversary. The Service’s keyboards player Kenn Goodman should be particularly happy to participate since he’s the label’s founder. Roots rock band Boom Hank, whose CDs include their debut Nuisance and the more recently released and oddly named Ishly Ghost Fly Your E & Y, will no doubt add to a rollicking night of fun.

Finally, congratulations to Pravda Records for its continued dedication to promoting indie rock talent. For 25 years, it’s given us not only The Slugs, The Service, and Boom Hank, but also artists like The Goldstars, New Duncan Imperials, Young Fresh Fellows, Susan Voelz, The Sleepers, The Farmers, and Cheer Accident.