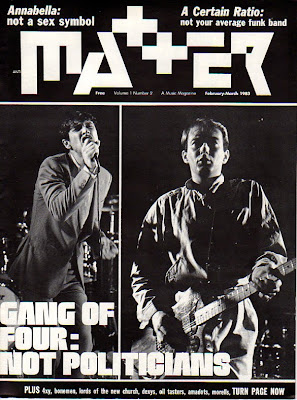 Here’s the second edition of what I hope will become a regular feature here on Broken Hearted Toy - - a celebration of independent rock publications from the past.

Based in Evanston, Illinois, Matter debuted in 1983, with editor and publisher Elizabeth Phillip at the helm. If I remember correctly, she originally intended it to be an R.E.M. fanzine, but quickly expanded its coverage to other bands.

This February-March issue (Volume 1, Number 2) offered features on Gang Of Four, A Certain Ratio, Lords Of The New Church, and Dexy’s Midnight Runners. Some of the artists whose LPs were reviewed included Chris Stamey, John Cale, and Rank & File. Phillip also reprinted a letter that scenester Nancy Rapchak had sent to then President of NBC Entertainment Brandon Tartikoff ridiculing the portrayal of punk rockers on TV shows like CHIPS and Quincy.

Steve Albini, who would go on to become a highly successful record producer, contributed a column called Tired of ugly fat?, in which he listed his favorite album and single releases from 1982. Apparently, some of Albini’s earlier musings prompted a letter to the editor which noted, “I actually like most of the Steve Albinis I’ve met. It’s just the ones that make their Steve Albininess their only identity that I despise, not Steve Albinis in general.”

Matter had a cool B&W format with a lot of photos, as well as ads from the Wax Trax and Gramaphone LTD. record stores, and the 950 Lucky Number and Exit rock clubs. It was a perfect barometer of its time, and remains a favorite in my collection.