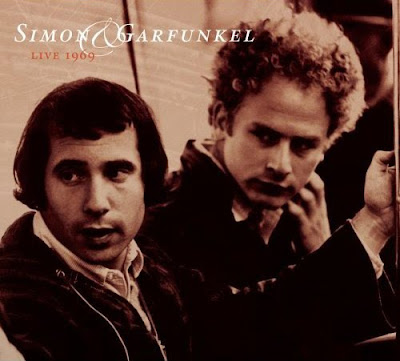 Note: This review has previously appeared in the Illinois Entertainer.

As Simon and Garfunkel begin playing “Bridge Over Troubled Water,” there’s no burst of recognition applause from the audience at Carnegie Hall. That’s because Live 1969 was recorded during a national tour that took place months before the album Bridge Over Troubled Water hit the record stores. Finally available decades after its originally intended release, Live 1969 provides an entertaining and historically interesting study of one of America’s best known folk rock acts.

The CD starts quietly with “Homeward Bound” and ends with the introspective “Kathy’s Song.” Back then, as the CD’s liner notes explain, Simon and Garfunkel opened and closed their shows as a duo; playing with the support of a full band in between. “Mrs. Robinson” is given a rollicking performance at a concert in Carbondale, Illinois. “At The Zoo” offers timeless political satire with lyrics like, “Orangutans are skeptical of changes in their cages.” In addition to favorites like “I Am A Rock” and “Sounds Of Silence,” Live 69 includes lesser known album tracks like “Song For The Asking” and a cover of the Everly Brothers’ “That Silver-Haired Daddy Of Mine.”