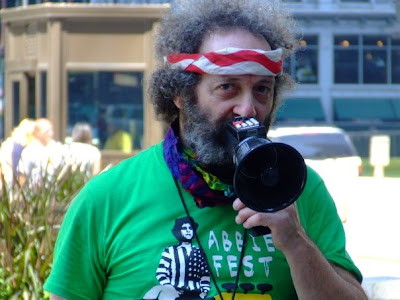 Harold Pinter’s The Birthday Party is an ambiguous tale of an ominous pair of men who arrive at a boarding house with the intent of forcing a reluctant Stanley Webber to celebrate his birthday. I saw the play in a Jeff-nominated production years ago at the Mary-Arrchie Theatre on Chicago’s north side, with Rich Cotovsky in the role of Stanley. There’s a birthday party coming to the Mary-Arrchie tonight, although not The Birthday Party. And instead of being ambiguous or ominous, this is a festive gathering to honor Cotovsky, who helped found the theatre group almost 25 years ago.

This isn’t the first time I’ve written about Cotovsky by any means. I once wrote a profile of him for the Illinois Entertainer, and I’ve covered Abbie Hoffman Died For Our Sins, the Mary-Arrchie’s rollicking, three-day annual festival, for I.E. as well as Streetwise, a local publication created to help the homeless. As a member of Famous In The Future, which is the only group other than the Mary-Arrchie itself to have performed at every one of The Abbies, I’ve come to respect Cotovsky’s talent, wild sense of humor, and passion for the Chicago theatrical community.

Back in 1989, when the first Abbie Hoffman Fest was held, Famous In The Future had just lost its mother hen, Lake Sirmon, leaving Frank Carr and myself to keep things going. I saw an ad in the theatre listings of The Chicago Reader seeking participants for a festival that would commemorate the 20th anniversary of Woodstock, and thought it would be a good fit for our group. When we showed up for our tech run at the Mary-Arrchie, it was clear Cotovsky wasn’t impressed with our amateurish approach. He had good reason to boot us from the festival, but that probably would have run counter to his vision of creating a bonding experience among Chicago’s multitude of performing artists. So he let us do The Abbie, where our revue of original comedy sketches drew a polite response, although not much laughter. Over the years, we would hone our talents, and eventually have some very successful shows at The Abbie. For that, we owe Rich a great deal of gratitude, and I suspect many other groups could tell the same story.

Of course, there’s more to Rich Cotovsky than taking pity on struggling theatre groups. Over the years, he has helped the Mary-Arrchie earn a reputation for cutting edge, critically acclaimed productions like Tracers, Cowboy Mouth/4-H Club, Buried Child, Mojo, and its most recent offering, the Jeff-recommended How To Disappear Completely and Never Be Found.

So here’s a toast to Rich Cotovsky and a wish for another successful season in 2010. Happy Birthday!