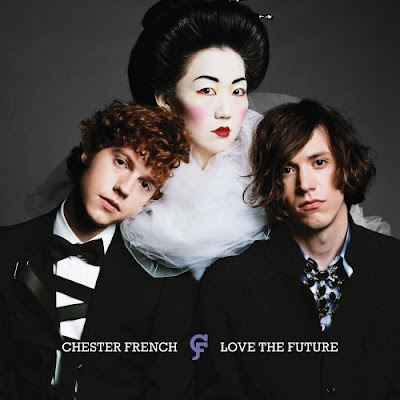 Best wishes for a healthy and happy 2010. This first post of the new year is actually a reprint of a review I had published in the Illinois Entertainer earlier this year.

A duo comprised of vocalist D.A. Wallach and multi-instrumentalist Max Drummey, Chester French revels in doing the unexpected on Love The Future. A somber opening track sung in Spanish serves as an ironic introduction to the fun that follows on this ambitious debut. Catchy indie rock songs stop and start again, sometimes drifting into lilting classic music or something out of a 1930s Hollywood musical.

It’s tempting to compare Chester French to The Flight Of The Conchords, but Wallach and Drummey have more in common with the witty pop observations of Fountains Of Wayne and Squeeze. On “Bebe Buell,” an aspiring musician looks for love in L.A., while the acoustic “Beneath The Veil” deals with attending one’s own funeral. “Neal,” a satiric look at an average guy’s trudge through life, has a peppy ska arrangement, while the simple and goofy “Fingers” smacks of vaudeville. And if all this genre-hopping wasn’t enough, Chester French could score a dance club hit with the infectious “She Loves Everybody.”