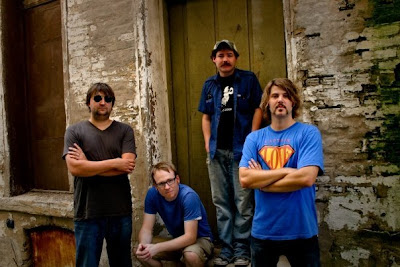 Photo taken from Dan Hubbard And The Humadors Facebook page.

Here are some more of the interesting local acts I came across in 2009. Note: These reviews originally appeared in the Around Hear column of the Illinois Entertainer.

Dan Hubbard And The Humadors exude a workingman’s sensibility on a self-titled CD filled with easy-going rock songs about finding love and a purpose in life. Hubbard’s expressive vocals are appealing, and having three back-up vocalists results in some impressive harmonies. “You’re All I Need” provides some Buddy Holly type fun and “Run For Our Lives” has a melodic Country & Western arrangement.

The energetic funk rock on The Short Attention Span’s Pay Attention CD is propelled by Mike Stankiewicz and Paul Parello Jr., both of whom fill the guitarist/vocalist role. Their rapid fire playing on “Apple Tree” recalls Red Hot Chili Peppers, while “Me Me Me” is more hard rock. Bassist RJ Neumann and drummer Jorge Tobias also impress, especially when Neumann takes center stage on the instrumental, “Extended Faith.”

Marc Kelly Smith, organizer and superstar of Poetry Slams at the Green Mill Lounge, loads his latest CD, Love And Politics with rapid-fire spoken word pieces set to jazz and hip-hop created by his son Adam Kelly Smith. It’s a potent combination, particularly the urban romance of “Street Musician” and satiric “Radio Dope.” Marc’s rough-edged voice and arresting imagery will resonate with fans of Tom Waits or Dennis Leary, as well as anyone else who’s willing to listen.

Listening to Blane Fonda’s debut E.P. Master Of Stars And Broken Arms is like being at a party where you’re scared of the host. Vocalist Mark Weasel yelps on some tracks and croons on others while his bandmates play adventurous dance rock. “Fess Up, Fess Down” is a melodic techno song but on “In Search Of The Giant Squid,” Blane Fonda mixes disco, rap, and Frank Zappa in a blender without a lid. It’s a mess, but fun.