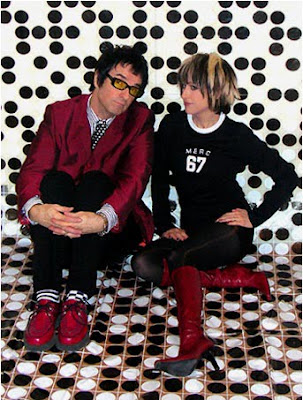 Time for another mixed stew of entertainment events coming up in the near future.

Drummer Brad Elvis will be as busy as Cupid this Valentine’s weekend, performing with The Handcuffs, the band he formed with wife Chloe F. Orwell, in Chicago on Friday night, and then with The Romantics at the Pala Casino Resort & Spa in Pala, California on Sunday night. The Handcuffs, who are part of a triple bill at The Empty Bottle, will be previewing some new songs from their upcoming third CD. In related news, The Romantics’ lead vocalist - guitarist Wally Palmar, best known for singing “What I Like About You,” has joined the ranks of Ringo Starr’s All Starr Band 2010 Tour.

Over The Rhine will be returning to Illinois for a performance at Space in Evanston on April 28 and 29th. The Ohio-based band, led by vocalist-guitarist-piano player Karin Bergquist and guitarist-bassist-back-up vocalist Linford Detweiler, is currently selling the Live From Nowhere Volume Four CD on its website. The two-disc set features Over The Rhine’s engaging blend of Country & Western and alternative rock recorded at The Taft Theatre in Cincinnati, and includes a 20-page booklet.

Bass player-harmony vocalist Herb Eimerman is our man in Lake Villa, Illinois for The Britanicas, which is a sort of United Nations of power pop. Well, three nations. Joining Eimerman, who has released his share of solo albums, is guitarist-vocalist Magnus Karlsson of Sweden, and drummer- vocalist Joe Algeri of Australia. Judging from the tracks available to download on their MySpace page, The Britanicas didn’t stumble upon their moniker by accident. “Don’t Go Back,” “Blue Sky Grey,” and “One Of These Nights” offer British Invasion style guitars, melodies and harmonies. The trio is hoping for a mid 2010 release for its debut CD.

Dolly Varden vocalist-guitarist Steve Dawson’s second solo effort, I Will Miss The Trumpets And The Drums is now available on Amazon and iTunes. Dawson will support the new CD with several upcoming gigs, including March 12th at Martyrs in Chicago; April 25th at Space in Evanston, and at the Old Town School of Folk Music on May 16th. Meanwhile, Dawson has posted a video for his thought-provoking tune “Mastodons” on YouTube. The clip features some intriguing animation by his wife and Dolly Varden co-founder, Diane Christiansen. The animation will also be part of the Notes To Nonself multi-media art exhibit that runs from February 11th to May 2nd at the Hyde Park Art Center on Cornel Street in Chicago.

Veteran guitarist and Sopro recording artist Joe Jammer will be performing with his band Flying Tigers from 9PM to midnight at The End Zone on south Western Avenue in Chicago this Saturday, February 13th. For further information, call 773-238-7969.