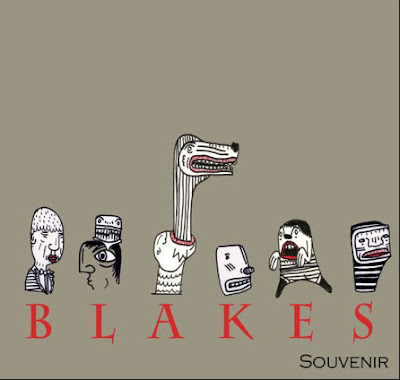 Souvenir, the latest release from The Blakes, is like a pulp fiction paperback filled with tales of two-timing women, dive bars, and dirt-poor rural towns. Reportedly taking their name from the acclaimed English poet William Blake, vocalist-guitarist Garnet Keim, bassist-vocalist Snow Keim, and drummer Bob Husak set their gritty songs to basic garage rock arrangements with an occasional foray into a different genre. At times, the music comes across as derivative, but for the most part, Souvenir is a keeper.

The melodic “Charmed” is an Old West yarn with a hint of sexism in the way a man threatens the girlfriend who keeps cheating on him, before deciding he’d rather just head off to Mexico. “Dog Of Sin” effectively channels The Velvet Underground, while on the raw “Next Time Around,” Garnet Keim slurs his vocals on spooky lines like, “I woke up in a coffin/I’m six feet down and nailed in.” The silly lyrics and playful piano playing on “”Magic” call to mind the way bands like Supergrass and The Kinks have tapped into vaudeville, while the highly charged “Batista” borders on punk rock.