You Be Me For A While 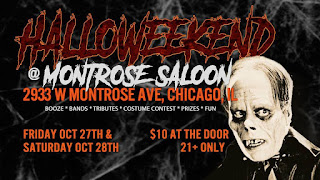 Halloween will soon be upon us, and along with costumes, trick or treating, and apple bobbing, that means several local bands will be doing tributes to rock stars in local clubs. At least in Chicago. Here’s a quick look at who’s becoming who this weekend and through All Hallows Eve. I’m pretty sure there are more tribute shows than I’m listing below, and if I find out about them (or someone contacts me), I’ll be sure to post them.

Halloweekend, a two-night event with at least four bands doing short sets each night, lands at Montrose Saloon this year, after having been staged at Martyrs’, The Abbey Pub, Quenchers Saloon, and other locations in the past. On Friday, October 27, Shoeless Joe Jackson will perform as Joe Jackson; Statutes Of Liberty rock out as Grand Funk Railroad, Phil Angotti will lead a pack of musicians performing as The Animals; Rachel Drew will cover The Pixies; and The Big Parade & Ary Jeebie wrap up the evening as Alice Cooper. On the Saturday night, Decoy Prayer Meeting pays homage to Tom Petty; The Webstirs will be The Guess Who; Androgynous Moustache performs as Crowded House; and you might as well face, Charlie Short will be Robert Palmer. Montrose Saloon is located 2933 W. Montrose.

The Martyrs’ venue, at 3855 N. Lincoln Avenue, has five bands doing tributes on Saturday, October 28. The Cells will be performing as The Smithereens; Craftwerc will have fun fun fun on the autobahn doing a Kraftwerk tribute; Phil Angotti and Friends will perform as Squeeze, The Differents will be playing AM Radio Hits; and John San Juan will be doing the songs of Eddy Money. On Halloween night at Martyrs, Creampuff Warriors will perform as The Grateful Dead, and Murley will be The Allman Brothers.

On Friday night, Subterranean (2011 W. North Avenue) is hosting a benefit/tribute fest for the Intonation Music charity. The Handcuffs will be playing George Harrison tunes; Dayton will play The Rolling Stones; The Good will perform as Queen; Kid Million will do Jane’s Addiction; The Cell Phones will play Lesley Gore; and Que Rico will perform as Toto.

If you’d rather be the one belting out tunes by famous (albeit no-longer-with-us) musicians, then FitzGerald’s in Berwyn would be the place for you on Saturday. That’s when the venue is holding a Ghosts Of Rock Stars Past Halloween Costume Party – Lip Sync Battle And Dance Party.
Posted by Terry Flamm at 9:47 PM