An Amazing Night At Martyrs' 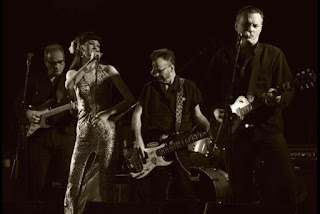 The Martyrs’ venue on Lincoln Avenue has been on a roll lately, with upcoming shows like The Vulgar Boatmen, Walter Salas-Humura from The Silos, and The Sunshine Boys on Thursday, October 19; Expo ’76 with The Total Pro Horns, Robert Cornelius and Susan Voelz on October 20; and a Halloween show featuring The Cells as The Smithereens, Craftwerc, The Differents, and Phil Angotti and Friends as Squeeze on October 28.

A recent four-band showcase proved to be a major success for each of the acts involved. On a bill that already offered a variety of musical styles, Samson The Aviator jumped from one genre to another within a single set. Fronted by powerful vocalist Aubrey Thornton, the quartet embellished heavy  songs with serious jamming, but also did well with alt rock numbers.Thornton was particularly impressive on a rapid-fire punk song.

The Amazing Heeby Jeebies offered original rockabilly/garage rock tunes, and also covered songs by Little Richard, The Sonics and Roky Erickson. Ary Paloma Jeebie is a versatile lead vocalist, with a stage presence that taps into 1960s a-go-go with a hint of Salome. Guitarists Bob Hyatt and Tommy “Boss X” Klein provided loads of firepower on songs like “Bad Feeling” and “She’s Just A Woman.” The Amazing Heeby Jeebies have a new album coming out soon.

Lead vocalist Chloe F. Orwell jokingly complained about following the charismatic Amazing Heeby Jeebies, but The Handcuffs, which also includes drummer Brad Elvis, easily won over the crowd with energetic and catchy tunes like “Miss You On Tuesday.” Orwell engaged the crowd in some raucous call-and-response singing on “Everybody Waves Hello” and “Gotta’ Problem With Me?” The Handcuffs are currently working on a new album.

Unfortunately, I had to leave in order to catch a bus and train back to Palatine, so I only saw one song by sci-fi rock band Tomorrow The Moon. But it was a prime example of the imaginative and powerful rock they’ve created on their recordings, and I’m hoping to catch a full set at some point.
Posted by Terry Flamm at 10:00 PM