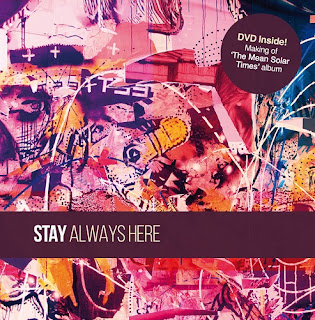 First, a quick message before moving on to the review.

Cordial Sins, a Columbus-based, seven-piece alt rock band fronted by vocalist-synth-violin player Liz Fisher and vocalist-guitarist Corey Dickerson, have an in-store appearance coming up this Friday at the RPM Music Chicago record store. The musicians were in town for Riot Fest (attending, not performing) and during a visit to the RPM store, asked the owner if they could perform there during their next tour. I discovered the store myself last Saturday night before the Tomorrow The Moon, Handcuffs, Amazing Heeby Jeebies, and Samson The Aviator show at Martyrs, and was impressed with the selection. RPM Music Chicago is located at 1839 W. Irving Park Road; the Cordial Sins gig on Friday starts at 7:00 p.m.

Always Here is the first Fruits de Mer effort from Stay since the Barcelona-based group released Mersey Dream on the U.K. label some years back. Like that record, Always Here is an EP that’s only available on colored vinyl. This time out though, Stay adds two original tracks to go with its cover versions of 1960s gems. It arrives at a time when Stay has also released a full-length effort titled Mean Solar Times on Picture In My Ear Records.

Although brand new, the melodic title track “Always Here” exudes the peaceful vibes and psychedelic instrumentation of late 1960s rock. It offers a message of support, as well as the intriguing line, “I need another angel, but my heaven isn’t here.” The other original, “You Know It’s Right,” also proves Stay has learned a lot from listening to music from that era, as its jangling guitars and lush harmonies evoke The Byrds.

A faithful (pun intended) take on “Every Christian Lion Hearted Man Will Show You,” from the first Bee Gees album, proves these guys even know the more obscure stuff. They don’t duplicate the original’s monk chanting, but some organ playing adds a church element. Keyboards also figure prominently in a rollicking version of The Kinks’ “Where Have All The Good Times Gone?” as well as a cover of “Rock And Roll Woman” that does Buffalo Springfield proud.
Posted by Terry Flamm at 9:40 PM