A Few Tricks But Plenty Of Treats 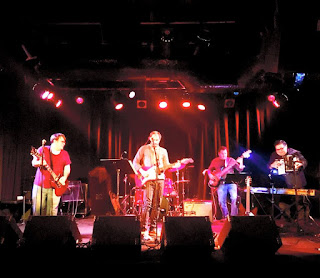 It would have been possible in Chicago this past weekend to go from bar to bar checking out rock band tribute shows, much like kids trick or treating in their neighborhood. The Montrose Saloon, Live Wire, Martyrs’, and Subterranean were just a few of the venues presenting local musicians covering famous ones. It would have been great to go to them all, but due to a hectic schedule, I was only able to drop by Martyrs last Saturday night.

In keeping with the holiday, a few of the acts had tricks up their sleeves. John San Juan and his band’s set was listed as an Eddie Money tribute but anyone hoping for “Two Tickets To Paradise” would have been waiting so long to hear that or any other Money material. That’s because San Juan instead performed songs by the less commercial but catchy and engaging Teenage Fanclub.

Phil Angotti and Friends delivered a set of Squeeze hits as promised, and captured the sophisticated pop of “Black Coffee In Bed,” “Take Me I’m Yours,” “Tempted,” and “Up The Junction.” Still, the biggest treat from his set might have been the lesser known but irresistible “Messed Around.” Angotti also brought up guest musicians to augment the first-rate ensemble he had already hand-picked.

Like John San Juan, The Differents were in prank mode that night, but their idea was well-executed and clever enough to ensure nobody would complain. They promised a.m. radio hits, which for most people would mean the 1950s and 60s. Instead, they covered alt rock songs that were released long after the a.m. dial became infested with talk radio. An onstage announcer claimed the show was being broadcast live, and used the distinct patter of an old time disk jockey to describe the proceedings (“That was The Differents covering The Jam on ‘Start’”).

Comprising singer-guitarist Lou Hallwas (who had been one of Angotti’s guests) vocalist bassist Gary Stier, and drummer Dan Garrity, the band also covered The Pretenders’ version of “Stop Your Sobbing” and also roughed up Freda Payne’s “Band Of Gold.” Angotti climbed onboard to sing lead  and play guitar on Tom Petty’s “American Girl,” and by the time The Differents blasted through Harry Nilsson’s “Jump Into The Fire” and Cheap Trick’s “Southern Girls,” there were a number of guest musicians joining in on the fun.

Sadly, that was as much of the party I caught at Martyrs’ since it was almost midnight and I had to make the long public transportation trek back to Palatine.
Posted by Terry Flamm at 9:20 PM