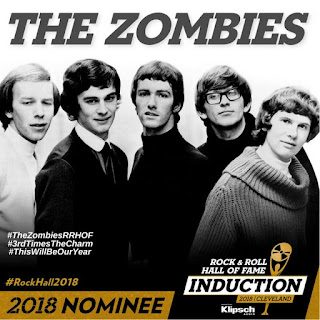 As noted by Patrick Ryan in USA Today, The Zombies, The Cars, MC5, Depeche Mode, and J Geils Band, are all back in contention after previously not making the cut. First time nominees Bon Jovi, Dire Straits, and Eurythmics are finally being considered, while Radiohead and Rage Against The Machine have been nominated in their first year of eligibility. It’s hard to pick, but I’m definitely rooting for The Zombies and The Cars.

Martyrs’ on Lincoln Avenue has an eclectic four-act event coming up tomorrow night that looks like it will be a lot of fun. The Handcuffs, led by vocalist-guitarist Chloe F. Orwell and drummer Brad Elvis (who also performs with The Romantics), always a offer festive mix of originals and occasional well-chosen cover. Sci-fi rock outfit Tomorrow The Moon features the impressive Steve Gerlach (he’s also in the Sons Of The Silent Age David Bowie tribute act) on lead vocals and guitar. The Amazing Heeby Jeebies perform spooky rockabilly/garage rock songs that make every gig a Halloween party.

Metric, the techno/rock band that has given us great songs like “Monster Hospital,” will be releasing a concert triple LP, Blu Ray, DVD package in March next year. Dreams So Real was recorded on the last date of its 2016 Lights On The Horizon tour. Autographed copies are now available for pre-order on the Pledge Music website.

The Fab Faux will be performing A Hard Day’s Night in its entirety, along with other Beatles tunes tomorrow night atThe Vic Theatre.

Phil Angotti and Friends will be celebrating John Lennon’s birthday on Monday, October 9 at Martyrs. Also at that same venue next week: The Vulgar Boatmen; Walter Salas-Humura from The Silos; and The Sunshine Boys on Thursday, and Expo ’76 with The Total Pro Horns with special guests Robert Cornelius and Susan Voelz on Friday.

The 53rd Chicago International Film Festival runs from next Thursday, October 12 through October 26 at AMC River East 21, just north and east of the downtown area. In addition to screening movies from every imaginable genre and location, the event will offer tributes to Patrick Stewart of Star Trek: The Next Generation and X-Men fame, and iconic English actress Vanessa Redgrave. Regular screenings are $15, special presentations are $20, and there discounts for seniors or students, and multiple-show passes are available.

The Laureates, a local band that has released a pair of full-length albums and recorded a number of interesting cover versions that could be downloaded from their website, will be at The Empty Bottle next Thursday, October 12.

Rebecca Toon and Tommi Zender, will be performing Joni Mitchell’s entire Court And Spark album at Wishbone North on October 19 as part of the restaurant’s Third Thursday series. Zender arranged the songs for acoustic guitar.

Ron Onesti, who’s been doing a bang-up job of bringing acts like Graham Nash, The Smithereens, The Romantics, Marshall Crenshaw, Steven Wright, Shoes, Pezband, Dwight Twilley, Off Broadway, and Micky Dolenz to The Arcada Theatre in St. Charles, has announced plans to create a Chicago Music Hall Of Fame. Honorees would stretch from the formative days of jazz and blues in the 1930s, through the folk and pop music of the 1960s, to more recents acts that have made Chicago proud. Considering Onesti’s organzational skills, it will be interesting to follow how this project comes along.

Tom Petty’s sudden death earlier this week left fans and fellow musicians alike struggling to process the news. Several turned to social media to express memories of the terrific songs he recorded and the live shows he performed. Those who worked with him described him as always friendly and a class act. I first heard Tom Petty on WXRT in Chicago, and was inspired to buy his self-titled debut album. Tracks like “Breakdown” and “Roclin' Aroound (Witrh You)” are still regarded as classics today. I only saw him perform once, on a double bill with Elvis Costello at The Riviera Theatre in 1979, but it was enough to set me on a course of following his music throughout the rest of his career.

The Bill Graham Rock And Roll Revolution continues its run at the Illinois Holocaust Museum And Education Center at 9603 Woods Drive through Nov. 12.
Posted by Terry Flamm at 11:03 PM