The Power Pop Shoppe Showcase Vol. 2 and The Old 97s This Weekend 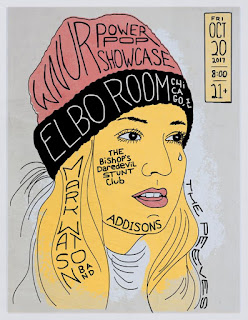 WNUR 89.3 radio personality Kirk Fox will bring the second installment of The Power Pop Shoppe Showcase to the Elbo Room on Lincoln Avenue tomorrow (Friday) night. Fox plays a variety of artists on his Power Pop Shoppe program, and so far, the live shows have been adventurous as well. Last March, The PPSS gave us a triple bill of singer-guitarist Phil Angotti, the quirky band The Bishop’s Daredevil Stunt Club, and The Sunshine Boys—a new energetic, politically aware trio comprised of music scene veterans.

The Bishop’s Daredevil Stunt Club, whose latest album Don’t Buy This Record follows in the tradition of fellow Midwestern acts Wilco and The Webstirs, are coming back for The Power Pop Shoppe Showcase Vol. 2. Two of the other bands on the bill, The Addisons and The Peeves, lean more toward an aggressive punk band, while The Mark Watson Band draws on Cheap Trick and Fountains Of Wayne for influences. It will be interesting to see if Fox once again requests that each act perform a cover of a power pop classic. The Showcase kicks off at 8:00 p.m.

Alt rock fans in Palatine and neighboring northwest suburbs have to be thrilled to find The Old 97s are booked for Durty Nellie’s this Saturday night. The venue has first-rate acoustics and a classy décor, but generally makes its bread and butter on local cover bands. This is definitely a bold move that should be rewarded with a packed house.

Led by lead vocalist Rhett Miller—who’s also released a few solo efforts—the band formed in Dallas, TX back in 1993. Over the course of 11 studio albums (and a few live ones), they crafted critically acclaimed alt rock/country classics like “Timebomb,” “Buick City Complex,” “Barrier Reef,” and “What We Talk About.” The online rock publication Paste describes The Old 97s as “one of the few bands that have never really put out a bad record.” Their latest non-bad effort, Graveyard Whistling, came out earlier this year.
Posted by Terry Flamm at 11:00 PM