Buffalos Bay - Living Under The Reef 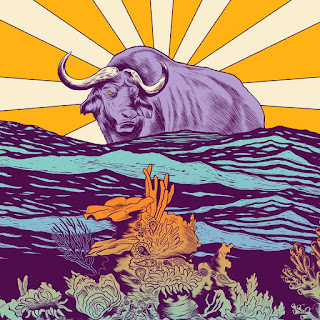 Formed in Belfast back in 2015, Buffalos Bay gained fame in Ireland after releasing the catchy and satiric single “In The Factory” at the start of this year. Their six-song EP Living Under The Reef just came out and it’s immediately evident why these guys claim The Kinks and The Bee Gees as major influences. Though the emphasis is on 1960s style pop, there’s also a hint of country and western twang from time to time.

“In The Factory,” with its “Muswell Hillbillies” twang and lines like, “always sipping tea, only thinks that he’s happy,” has already illustrated how much Buffalos Bay admires the way Ray Davies can wrap stinging social observations within irresistible melodies. “In Response,” “Make A Wish,” and “Portraits Of Polly” recall the delicate melodies of early The Bee Gees and showcase the harmonies of lead singer-bassist Stuart Miskelly, and rhythm guitarist-vocalist Andy Bell. “Weeping Onion,” which is actually a happy love song, even offers that off kilter approach to lyrics often taken by the Brothers Gibb.

“Early Morning Fry,” like “In The Factory,” uses a toe-tapping country and western arrangement. The title meal is apparently a sort of breakfast sandwich people eat on farms, and the joke here is that it can make you feel better no matter what goes wrong in your life. While everything on Under The Reef is well crafted and catchy, it would be nice to see Buffalos Bay expand its repertoire with a few more energetic songs next time out.
Posted by Terry Flamm at 9:58 PM