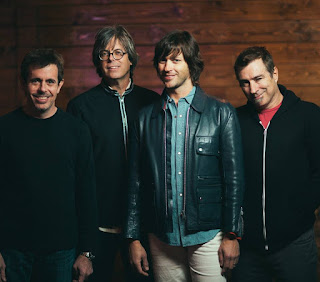 The Old 97s are performing at Durty Nellie’s with Lily Hiatt as their opening act in Palatine tonight. Despite its first-rate acoustics and a classy décor, this venue relies too much on local cover bands. So an adventurous move like this should be rewarded with a packed house.

Led by lead vocalist Rhett Miller, the band formed in Dallas, TX back in 1993 and has released 11 studio albums. The online rock publication Paste describes The Old 97s as “one of the few bands that have never really put out a bad record.” Their latest non-bad effort, Graveyard Whistling, came out earlier this year.

This Is This, a local band that took its name from The Deer Hunter and who recorded a couple of albums of catchy originals, will be doing its final show tomorrow night at the new Buffalo Creek Brewing venue in Long Grove.

Last night’s Slumgullion had to be postponed because I was at at Filament Theatre watching Tellin’ Tales Theatre’s original Halloween-style musical comedy Six Stories Up – In Haunted Chicago. It concerns middle school kids encountering some famous Chicago ghosts while on a field trip ad wraps up its run this weekend. Filament Theatre is located at 4041 N. Milwaukee Avenue.

The Dayna Clay Project will host the Unplugged: A Survivor’s Story In Scenes And Songs Book And Album Release - Benefit Show this Sunday, October 22 at City Winery Chicago. The event starts at 1:00 p.m. According to the Chicago Tribune, the book was inspired Kurt Cobain.

Destinos, the first Chicago International Latino Theater Festival continues this weekend, and runs through October 29 at various venues in town.
Posted by Terry Flamm at 5:19 PM