Scaring Up Some More Fun 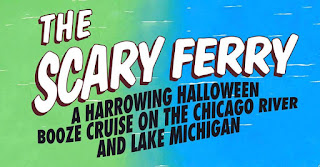 The Scary Ferry  - A Maritime Masquerade On The Chicago River and Lake Michigan will feature Archie Powell And The Exports, who’ve racked up some rave album reviews here on Broken Hearted Toy, along with Family Of Geniuses, and Band From The Back Porch this Friday night. In addition to live music, there will be costumes and prizes. The fun starts at 7:30 p.m.

Here’s an addition to yesterday’s You Be Me For A While post about upcoming tribute band shows: The Fab Four will be performing Beatles songs this Friday, October 27 at Star Plaza Theatre in Merrillville, IN. It’s not related to Halloween, these guys do this stuff all the time.

A super hectic schedule last week decimated my blogging output, resulting in missed opportunities for promoting some worthwhile events. I even neglected to mention Elgin’s annual Nightmare On Chicago Street Halloween Festival, which was held in the city’s downtown area on Saturday, October 21. Jeff Kelley and Dave Metzger once again created a zombie-related comedy/thriller to be screened as part of the festivities. I have a small part in their new The Elgin Dead film, which makes my failure to mention it here even more glaring. At least I can say that The Elgin Dead can now be seen on YouTube.
Posted by Terry Flamm at 10:08 PM