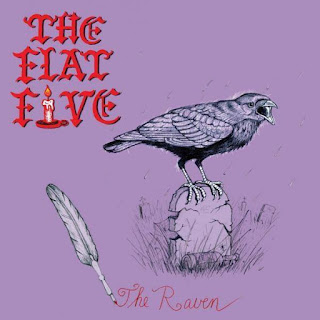 The Flat Five has been called a Chicago super group due to members Casey McDonough, Kelly Hogan, Scott Ligon, Nora O’Connor, and Alex Hall being veterans of the local music scene and beyond. There’s a vintage quality to their music that includes silly lyrics, smooth-as-silk crooning, jazz beats, and occasional Latin rhythms. After years of performing together on an irregular basis, The Flat Five surprised its fans with a full-length debut last year.

That entertaining vibe of It’s A World Of Love And Hope continues on the band’s recent 45 rpm, colored vinyl single “The Raven.” The members sing Edgar Allan Poe’s words verbatim to finger-snapping arrangement with keyboards and percussion. It’s tempting to think the melody crafted by The Flat Five could be more adventurous, but that approach might have obscured the fun of turning one of the most chilling poems ever written into an irresistible Halloween party song. “The Raven” can be ordered on vinyl or downloaded via the Bloodshot Records site.
Posted by Terry Flamm at 8:28 PM