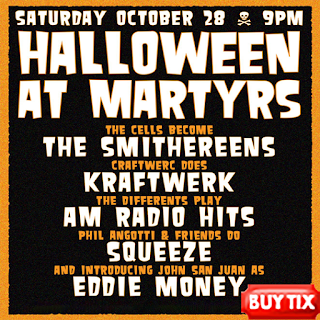 A warm Broken Hearted Toy welcome to the iconic Bob Dylan, who’s in town for a WXRT concert tonight at the brand new Wintrust Arena on the lakefront. Chicago’s own legend Mavis Staples will also be performing, which makes this a potent double bill.

Dylan is on the cover of a new Heritage Auctions catalog I just received in the mail. I’m only familiar with Heritage because the company usually has reps at Fest For Beatles Fans, and they’re very friendly. Their Music and Entertainment Memorabilia Signature Auction coming up live in Dallas and online on November 11 includes a “Bob Dylan owned and stage-played 1963 Martin D-28 acoustic guitar used on stage at George Harrison’s Concert For Bangladesh and the Rolling Thunder Review Tour.” There are also items related to The Beatles, The Rolling Stones, Billie Holiday, Pink Floyd, The Who, Led Zeppelin, and Marilyn Monroe. The opening bid on the Dylan guitar is $300,000.

Halloweekend, the annual two-night tribute event that offers at least four bands doing short sets each night, kicks off at Montrose Saloon tonight. Depending on what time you read this, you could catch part of tonight’s like up of Shoeless Joe Jackson as Joe Jackson; Statutes Of Libery as Grand Funk Railroad, Phil Angotti as The Animals; Rachel Drew covering The Pixies; and The Big Parade & Ary Jeebie as Alice Cooper. Tomorrow night, Decoy Prayer Meeting pays homage to Tom Petty; The Webstirs will be The Guess Who; Androgynous Moustache performs as Crowded House; and Charlie Short will be Robert Palmer. Montrose Saloon is located 2933 W. Montrose.

There’s also a tribute show going on at Subterranean tonight, as part of a benefit/tribute fest for the Intonation Music charity. The Handcuffs will be playing George Harrison tunes; Dayton will play The Rolling Stones; The Good will perform as Queen; Kid Million will do Jane’s Addiction; The Cell Phones will play Lesley Gore; and Que Rico will perform as Toto.

There are five bands doing tributes tomorrow night Martyrs’ on Lincoln Avenue. The Cells will be performing as The Smithereens; Craftwerc will be doing a Kraftwerk tribute; Phil Angotti and Friends will perform as Squeeze, The Differents will be playing AM Radio Hits; and John San Juan will be doing the songs of Eddy Money

If you’d rather be the one belting out tunes by famous (albeit no-longer-with-us) musicians, then FitzGerald’s in Berwyn would be the place for you tomorrow night. That’s when the venue is holding a Ghosts Of Rock Stars Past Halloween Costume Party – Lip Sync Battle And Dance Party.

The Safes, a Chicago-based band whose punk-inflected indie rock albums have been favorably reviewed here on BHT, have a record release party for their new release Tasty Waves coming up at Beat Kitchen on November 22. The Differents, Little Boy, Jr., and The Hustle are are also on the bill that night.

The Bangles, The Romantics, A Flock Of Seagulls, Violent Femmes, Nick Heyward, Boy George And Culture Club, Salt N Peppa and Adam Ant will all be on the bill at the Totally 80s Live Show coming up on January 26 at the Honda Center in Anaheim, CA.

Congratulations to my nephew Joe Flamm on being chosen as one of the contestants for the upcoming season of the Bravo Channel’s Top Chef  program. Joe is currently the chef at critically acclaimed Spiaggia on Michigan Avenue. Our family is extremely proud of him.

A tip of the cap to Chicago Cubs first baseman Anthony Rizzo on proving once again that he’s first-class guy. Rizzo, who has battled cancer himself, had already sent 12-year-old Abby Schrage an autographed picture to help her cope with her treatment for brain cancer. When the news broke that Schrage was devasted after the photo was stolen from her hospital room, Rizzo sent another signed photo, a signed jersey, and some tickets so she and her family can go to the Cubs’ 2018 season opener.

Just when you thought they might be dead (pronounced ‘did’ with A New Zealand accent) The Flight Of The Conchords have announced upcoming concerts in Ireland and the U.K. According to posts on Facebook, the March/April 2018 shows sold out almost immediately.

A super hectic schedule last week decimated my blogging output, resulting in missed opportunities for promoting some worthwhile events. I even neglected to mention Elgin’s annual Nightmare On Chicago Street Halloween Festival, which was held in the city’s downtown area last Saturday. Jeff Kelley and Dave Metzger once again created a zombie-related comedy/thriller to be screened as part of the festivities. I have a small part in their new The Elgin Dead film, which makes my failure to mention it here even more glaring. At least I can mention that The Elgin Dead can be seen on YouTube.

The Fall issue of Inspirer came out before the 2018 nominees for the Rock And Roll Hall Of Fame were announced but the magazine and the Hall seem to be somewhat on the same wavelength. Inspirer, which is dedicated to covering women in music and entertainment, ran a feature titled Rock And Roll Hall Of Fame, Induct These Women. Three of their suggestions—Nina Simone, Kate Bush, and Chaka Khan are among this year’s nominees. Inspirer’s RRHOF recommendations also included The Runaways, Janet Jackson, The Go-Go’s, PJ Harvey, Pat Benatar, Lucinda Williams, and Carole King.

Belly, of “Feed The Tree” fame, has launched a Pledge Music campaign to help with the release of its long-awaited third album. Those who sign up for the yet-to-be-titled effort will have access to exclusive merchandise like signed vinyl, posters, and special show passes.
Posted by Terry Flamm at 10:31 PM