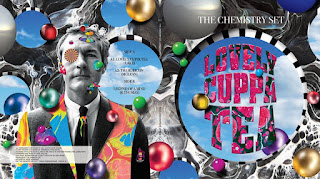 Veteran English prog/psychedelic rock band The Chemistry Set continues its mutually beneficial relationship with Fruits der Mer with the release of the Lovely Cuppa Tea EP. It follows the 2015 full-length LP The Endless More And More, which also came out on the U.K. vinyl-only indie label. The new seven-inch record, sporting FdM’s customary color vinyl, also includes “The Rubicon” and a cover of The Moody Blues’ “Legend Of A Mind.”

“Lovely Cuppa Tea” is a quintessential British pop song, brimming with clever rhymes about the magical powers of the title brew, and is set to a catchy arrangement. The high-energy and psychedelic “The Rubicon” protests against the current political climate while simultaneously proclaiming, “Let love shine bright into your day.” By covering “Legend Of A Mind,” The Chemistry Set returns to the subject of LSD after paying tribute to the drug’s creator on their own “Albert Hoffman” on The Endless More And More. It’s faithful to the original, but also adds its own touches, like a spoken word bit, and festive horns.
Posted by Terry Flamm at 9:34 PM