An Adventurous Rock And Roll Event 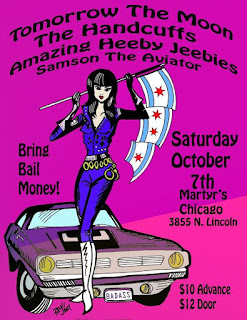 There’s a four-band showcase coming up this Saturday night at Martyrs’ on Lincoln Avenue that taps into a variety of genres. Samson The Aviator describes its music as a love child of grunge and funk, and the coed quartet adds a hard edge to melodic tunes like “Big Top Bill” and “Tempest.” The Handcuffs, led by vocalist-guitarist Chloe F. Orwell and drummer Brad Elvis (who also performs with The Romantics), have released three albums filled with catchy indie rock songs, and it’s a safe bet the one they’re currently working on will follow suit. Their live performances are always a fun mix of originals along with an occasional well-chosen cover like Mott The Hoople’s “All The Way To Memphis” and The Kinks’ “Lola.”

Tomorrow The Moon, led by vocalist-guitarist Steve Gerlach (he’s also in the Sons Of The Silent Age David Bowie tribute act and was a long-time member of The Bad Examples), have released two EPs and a full-length album of imaginative and highly melodic sci-fi rock. Their live show is sure to be impressive. The Amazing Heeby Jeebies have established a loyal following on the club scene with fun rockabilly/garage songs like “Loupe Garou” and “Mummy” that make every gig a Halloween party. Martyrs’ is located at 3855 N. Lincoln Avenue, the show kicks off at 8:45 p.m. Admission is $12.00.
Posted by Terry Flamm at 10:35 PM