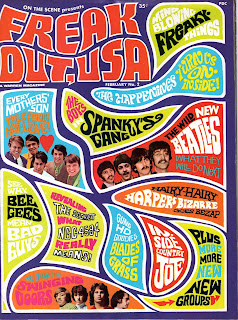 There’s no year mentioned on the front cover of this February No. 2 issue of Freak Out, USA magazine. But study it for a moment, and see if you can guess. I’m betting you came up with 1967. Something about the colorful montage of band photos and funky type just screams The Summer Of Love. It was put out on a quarterly basis by the Warren Publishing Company, with James Warren serving as Editor and Publisher. Rochelle Larken was Contributing Editor, and Art Direction was credited to Brill And Waldstein, which sounds like it could have been a graphic design studio, a law firm, or a comedy duo.

Aside from the front and back cover, every page was black and white on a newspaper type stock. This issue offered profiles on The Beatles, The Doors, Country Joe And The Fish, Spanky And Our Gang, The Bee Gees, and a few other groups. There’s no mention of The Young Rascals on the cover, but they’re the lead story. This issue of Freak Out, USA would be great for a Chicagoan to bring to The Rascals: Once Upon A Dream, the Little Steven Van Zandt-penned concert/play currently showing at the Cadillac Palace in the downtown Theatre District. In the Freak Out, USA interview, Eddie Brigati, Felix Cavaliere, Gene Cornish, and Dino Danelli discussed what they look for in a girl.

The headline for The Beatles story asked, “Has Fortune Turned On The Fab Four?” and examined the band’s response to the death of Brian Epstein. Another article was titled “The Bee Gees Are Bad Guys!” This was back when the group had five members. The magazine described The Doors as “One of the best and strongest of the new sound groups.” There was a column called “Freaky Things” that had brief news items about Twiggy, Peanut Butter Conspiracy, The Royal Guardsmen, The Critters, The Lovin Spoonful, Procol Harum, and Engelbert Humperdinck.

A Bonus Freak Out page featured “Great Wallet Pix Of Groovy Guys,” including Van Morrison and Donovan. There were no ads in this issue, other than a back cover order form for Freak Out Rock Band Color Posters. They were $1 each.
Posted by Terry Flamm at 10:48 PM