Some Time In New York City 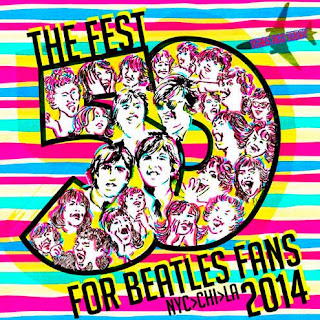 Before moving on to Fest For Beatles Fans - New York, I’d like to thank music producer Will Avery for his thoughtful response to my mentioning him in last Friday’s Slumgullion column. His Baby Gonna Holla CD, a collection of funk and classical children’s songs, is due out early next year. Avery, who recently did a successful three-hour show in Taiwan, not only took the time to thank me for the plug, he included a link to a song called “Wait On You” by a trio from The Netherlands called Slumgullion. It’s a mostly instrumental song that mixes hip-hop with old-fashioned dance hall music. Each member has letters from the word Slumgullion on his forehead. I don’t know if I’d go that far to promote my blog, but now my weekly column can have its own theme song. Thanks Will.

This past Sunday, on her Breakfast With The Beatles show in Chicago, WXRT air personality Terri Hemmert described the festivities Mark and Carol Lapidos of Fest For Beatles Fans are planning to commemorate the 50th Anniversary of The Beatles’ first footsteps on American soil. The multi-faceted event will run February 7th through 9th. Although the very first Fest was held in New York in 1974, the official site notes this will be the first time that Fest For Beatles Fans has been held in New York City in 30 years. And it will taking place on the “EXACT 50th Anniversary of The Beatles’ Arrival in America.”

Guests include The Smithereens, who’ll be recreating the Beatles’ February 11th 1964 concert at the Washington, D.C. Coliseum. Anyone who owns Meet The Smithereens or B-Sides The Beatles, or has seen the New Jersey-based band cover The Beatles in concert knows their appearance at Fest For Beatles Fans - New York is going to be special. Peter Asher, who does a funny and informative show with videos and a live band; Donovan, who rode a Broken Hearted Toy endorsement into the Rock And Roll Hall Of Fame in 2012; and Chad & Jeremy, who gave a smashing performance at the 2013 Fest For Beatles Fans - Chicago, are also on the bill.

Producer-comedian Martin Lewis will serve as Master of Ceremonies, along with Ken Dashow, who does a Breakfast With The Beatles show on Q104.3 in New York. Chicago fans are familiar with Lewis, who co-hosts the Fest with Hemmert at the Hyatt Regency O’Hare. Other New York guests who have been to Chicago include singer Billy J. Kramer, Beatles Fans Club secretary Freda Kelly, musician/producer Mark Hudson, and the Beatles  cover band, Liverpool. Special activities for the 50th Anniversary include a recreation of The Cavern Club,  a JFK Salute The Moment the ride from the airport, and a trip to the Ed Sullivan Theatre.

Hemmert noted that she's going to Fest For Beatles Fans - New York, but lots of us in Chicago can’t help but wonder how much of these festivities and special guests will be on hand when Fest For Beatles Fans comes to Chicago in the weekend of August 15th through 17th.
Posted by Terry Flamm at 10:18 PM