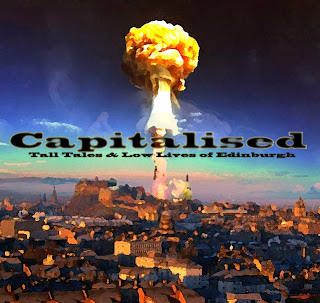 The Scottish capital city of Edinburgh strikes an intriguing balance between the historical and the hip. It’s the home of the magnificent Edinburgh Castle and the fun and fascinating Camera Obscura Museum, but also has Rose Street, which overflows with record stores and other trendy establishments. You’ll find bands playing on street corners, and of course, there’s the world-famous Festival Fringe every August.

You have to love a song with a title like, “One Mistake From The Gutter, A Thousand Decisions From The Stars,” especially when singer-guitarist Epsilon One gives it a melodic arrangement reminiscent of Love And Rockets. Scott Watson of The Jackals gives a hard-edged and compelling acoustic take on his band’s “Dancin’ Round The Nails (Wooden Box Blue)”, while The Valkarys “(Love’s) A Losing Game” could have come from one of Johnny Cash’s American Recordings albums. The shimmering “Enomena” by The Durty Wurks is the best of three shoegazer tracks, and “Jiggery Pokery” by The Rhemedies gives Capitalised a welcome shot of glam/garage rock.
Posted by Terry Flamm at 10:36 PM