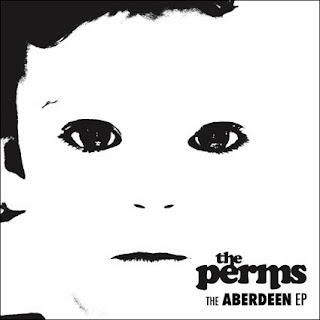 Fresh from a series of European gigs, The Perms have just released the follow-up their fifth full-length effort, Sofia Nights (see December 7, 2011 post in Archives). All four songs on the Canadian trio’s The Aberdeen EP have a hard edge to them while retaining strong melodies and the harmony vocals of guitarist-vocalist Chad Smith and bassist-vocalist Shane Smith. Drummer John Huver helps the Smith brothers inject some variety within these arrangements.

“Walk Away” is the closest The Perms come to hard rock, and features Chad Smith cutting loose with some energetic playing. “The Parent Thing,” which once again taps into the band’s knack for social satire, kicks off with short bursts of energy before breaking into a full, melodic romp with a touch of The Ramones. The title track and “It’s Mania” both sport a big sound built on layers of vocals and energetic playing.
Posted by Terry Flamm at 9:40 PM