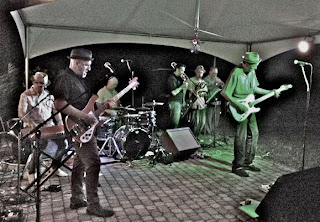 A merchants’ association in Palatine is celebrating the long-awaited return of EXPO ‘76 tonight with activities throughout the downtown area. Just a few hours before the eclectic cover band takes the stage at 9:00 PM at Mac’s On Slade, various stores will be offering complimentary hors d’ oeuvres and wine samples, along with a raffle to win a pork pie hat worn by one of the EXPO ‘76 musicians. Some residents believe a mysterious statue of a man blowing a horn while riding a horse was erected months back to honor the Total Pro Horns; musicians who often back EXPO ‘76 at live performances.

Actually, I may have confused two separate events taking place in Palatine tonight; the annual Holidays On The Town festival, and the EXPO ‘76 gig at Mac’s On Slade. And I made up the bit about the pork pie hat raffle.

Meanwhile, in the heart of Chicago, there’s an impressive four-band lineup at Martyrs’ on Lincoln Avenue that includes I Lost Control, The Handcuffs, Hard Kiss, and The Blissters. The music starts at 9:00 PM.

Singer-songwriter Phil Angotti will be joined by musicians Casey McDonough, Scott Ligon, and Tony Kidonakis for what they’re calling a Beatle Freakout tomorrow night at FitzGerald’s in Berwyn. They’ll be celebrating the 50th Anniversary of With The Beatles by performing tracks from the LP.

The Rock And Roll Hall Of Fame has announced that it will introduce an exclusive new line of inductee t-shirts at its museum store in Cleveland on Black Friday next week. The shirts will be available online December 6th. So far, I can’t tell if the t-shirts will be just a few selected artists (the photo shows models wearing Jimi Hendrix, Elvis Presley, and Muddy Waters versions) or if a whole bunch will be created. So far, my wish list includes The Hollies, Crosby, Stills And Nash, Heart, The Beatles . . . We’ll see what happens.
Posted by Terry Flamm at 12:03 PM