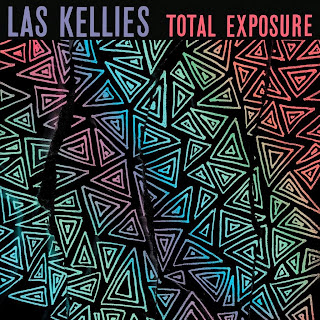 Slumgullion will be late this week. Here’s a  review that originally ran in the Illinois Entertainer.

There’s a free fall mentality running through Total Exposure, the fourth release from Las Kellies, as if the Argentine trio is doing whatever it wants with little concern for commercial success. It’s evident that guitarist-vocalist Ceci, bassist-vocalist Betty, and drummer-vocalist Sil hooked up with Iván Diaz Mathé (Ivy Lee), one of their country’s top reggae-dub producers on a number of these tracks. But there are also forays into hip-hop, new wave, and funk, along with the occasional male guest vocalist.

Reggae star Dennis Bovell drives “Don’t Look Suspicious,” a stinging but fun satire on immigration, and singer Ian Svenonius makes for a funny Lothario on “Two Types.” A pair of instrumentals add to the party ambience, but Las Kellies are definitely the most enjoyable when they’re singing. “King Lion” mixes ethereal voices with a driving beat, the nocturnal “Melting Ice” grooves to a series of rhyming come-ons, and “Illa San Simon” features talky, seductive vocals.
Posted by Terry Flamm at 10:26 PM