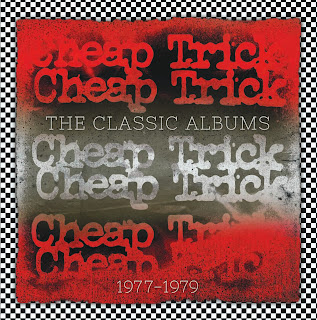 One of America’s Thanksgiving traditions, along with family dinners, football, and expressing gratitude, is the arrival of treasure chest-sized editions of the daily newspapers, filled with retail flyers. Of course, now it’s possible to do all your Black Friday shopping online, but some old-school bargain hunters prefer the hand-to-hand combat of snagging those amazing deals in overcrowded shopping malls. In keeping with the holiday tradition, here are a few Broken Hearted Toy gift ideas.

If you’re an avid vinyl collector, you know the drill when it comes to the annual Record Store Day in April, but the new November version will put you directly in the path of the Black Friday stampede. You’ll have to arrive early at your favorite independent record store tomorrow in order to snag treasures like Cheap Trick’s The Classic Albums 1977-79. This limited edition, custom-designed boxed set includes Cheap Trick; In Color; Heaven Tonight; Live At Budokan; and Dream Police. Other special Black Friday Record Store Day releases this year include the eight-song LP, The Doors Curated By Record Store Day; the Nick Lowe Quality Street 12” picture disc; the Harry Nilsson Rarities Collection LP; The Rolling Stones 7”, six-song version of Got Live If You Want It; and U2’s brand new 10” “Ordinary Love” single. Check the official Record Store Day website for the entire list.

With all the publicity Doctor Who has been getting for its 50th Anniversary The Day Of The Doctor special, there’s been some debate as to what would the best way for people previously unfamiliar with the British sci-fi TV series to get up to speed. I would highly recommend the BBC’s three-part DVD series, The Doctors Revisited. The first installment, 1–4, spotlighting William Hartnell, Patrick Troughton, Jon Pertwee, and Tom Baker, offers extensive information about the origins of Doctor Who, while the third, 9–11 covers the show’s rebirth in 2005, with Christopher Eccleston, David Tennant, and Matt Smith. In between, there’s a  5–8 edition that delves into the way Peter Davison, Colin Baker, Sylvester McCoy, and Paul McGann interpreted the role of The Doctor. As for The Doctor Who: The 50th Anniversary Special: The Day Of The Doctor, it will be available on Amazon December 10th.

WXRT has unveiled the track listing for Live From The Archives Volume 15, the latest in a series of CDs that feature exclusive concert performances that have aired on the FM station. This year, sales will help fund Oxfam America, an organization that works to end poverty and promote social change; and Cure Violence, which is dedicated to reducing violence around the world. The artists on Vol. 15 include Cheap Trick, Phoenix, Passion Pit, Shemekia Copeland, Jimmy Cliff, Blondie, Mayer Hawthorne, World Party, The Lumineers, and Serena Ryder. The CD will be available at Target stores  on December 3rd.

Music is always a good choice for gifts, so feel free to browse the reviews I’ve done over the past few years for some worthy options. Also, check out your favorite bands online and what new stuff they have to offer.

Take a look at this year’s Fest For Beatles Fans catalog, and probably the first thing you’ll want as a gift is an airline ticket to New York to see the Fest For Beatles Fans - New York’s 50th Anniversary Celebration of The Beatles’ First Visit To America. Special guests at this event include Peter Asher of Peter And Gordon; Donovan; Chad & Jeremy; Billy J. Kramer; and The Smithereens. If you can’t afford the trip to New York, the catalog has hundreds of Beatles-related items for sale, such as CDs, DVDs, t-shirts, posters, books, belts, wallets, pajamas, sunglasses, hats, puzzles, and iPad and laptop musicskins. If you’re not on the mailing list for the catalog, you can check out the Fest For Beatles Fans official website.

Kickstarter enables musicians, artists, and filmmakers to solicit funds for projects that might not otherwise see the light of day. Most of the participants offer one-of-kind perks in exchange for donations. The larger the amount you pledge, the more cool the gift will be if the project meets its goal. A great way to get involved in the creative process, and get something in return.

The Rock And Roll Hall Of Fame has all kinds of gift items, and now there’s a new, exclusive line of Inductee t-shirts. The eclectic selsection includes The Who, Elvis Presley, Heart, Muddy Waters, Blondie, Dion, The Crickets, Earth, Wind And Fire, and John Lennon. The attractive art work includes the RRHOF logo and the year the artist was inducted. I couldn’t find anything on the website to indicate that more Inductees will be honored with t-shirts in the future, but hopefully that’s the case. Only time will tell.

Also, check out the websites of your favorite bands for t-shirts, buttons, magnets, holiday songs, or other special items. For example, you can order a Cheap Trick bar stool for just $124.99 at the band’s online store.

Have fun doing whatever form of shopping you prefer, and have a Happy Thanksgiving!
Posted by Terry Flamm at 10:12 PM