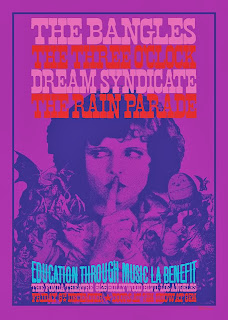 Director Casey Puccini, an alumni of the School of the Art Institute of Chicago, will be at the Gene Siskel Film Center for the Chicago premiere of his feature-length film, Children Without Parents.  Unfortunately, due to Slumgullion being delayed this week, it’s too late to see the 7:30 PM showing tonight. But Children Without Parents will also screen at the Gene Siskel Film Center on Monday, November 4th at 7:45 PM. The cast includes Jeff Award winner Sasha Gioppo, Kevin Stangler, and Bryn Packard, a gifted actor I had the honor of working with for a few years when he was a cast member of the Famous In The Future comedy group. Director Casey Puccini will be in person at both Gene Siskel Film Center screenings.

Speaking of School of the Art Institute of Chicago graduates, my niece Allison Flamm has a new website called Chi Gal Art, where she’ll be displaying her work. She also offers commentary on other artists, and includes links to some interesting sites.

Reunited power pop masters Pezband are back from a tour of Japan and will be at the brand new Wire club in Berwyn on November 9th.

Long time Illinois Entertainer contributor Bruce Pilato had a chance to talk with Graham Nash about his new autobiography, Wild Tales, at a New York hotel lounge recently. The interview, which appears in the November issue, includes Nash’s insight on what might have kept The Beatles together, and also reveals some interesting things about Crosby, Stills, Nash and Young that even some ardent fans might not have known. Sadly, there’s still no word on Nash bringing his solo concert or book signing tour to Chicago.

The Red Line Tap, which local free paper New City names as Best Amateur-Band Regional Touring Nightspot in its current Best Of Chicago issue, continues to book some impressive shows. The Chicago Pop Revue was recently held there, and upcoming shows include a double bill of The Bad Examples and The Viaducts on December 13th.

On November 30th, alt rockers whitewolfsonicprincess hosts their annual Toys For Tots Extravaganza at Red Line Tap. The performers include Joe Lapsley & Jana; The Rut (Desiree Burcum and Frank Carr in a musical offspring of the Famous In The Future comedy group); The Telepaths; The Revelettes go-go dancers; Gunnelpumpers, and Will Phalen and the Dirty Dollars. I just saw Phalen impersonating Beck at Halloweekend at Martyrs’, and he’s definitely a talented rocker.

The Return Of The Paisley Underground, featuring The Three O’Clock, The Bangles, Dream Syndicate, and The Rain Parade has two gigs coming up: A concert in San Francisco on December 5th at The Fillmore, and the Education Through Music benefit at the Fonda Theatre in Los Angeles on December 6th. It will be the first time these acts have performed together in 27 years.

The highly influential power pop band The Flamin Groovies have just announced a fall tour in support of a new EP that’s due out early next year. It includes dates in Toronto, Detroit, Cleveland, Washington, D.C., Boston, Brooklyn, and Oakland. More gigs should be announced in the near future.

Sound Opinions radio show co-host Jim DeRogatis posted a review on the WBEZ  blog site of Under The Covers Vol. 3, the latest collection of decade-centric copy tunes by Matthew Sweet & Susanna Hoffs. They take on the 1980s this time, and it seems like Rogatis thinks its their best retro collaboration yet.

In other collaboration news, Norah Jones and Billie Joe Armstrong are doing Foreverly, an album of Everly Brothers covers together.

It’s no surprise that psychedelic rockers The Luck Of Eden Hall have filmed an imaginative and artsy video for “Sassafras Overcoat.”  The song will be on their next full-length release, Victoria Moon.

Magatha Trysty’s new single, “Raygun,” (you might have seen the cool looking flyers for it in Reckless Records) from a forthcoming CD sounds like the Chicago-based coed band is continuing in the catchy, well-crafted indie rock vein of its 2012 release, Your Clothes Will Wear You. I’m hoping to have more to say about  “Raygun” in the near future. Magatha Trysty will give a preview of some new songs when it hosts Double Door Holiday Rockathon!! on December 17th at the Double Door, with guests 10,000 Light Years and The Elements Of Style.

French trio The Plastiscines have postponed their concert tour to concentrate on finishing their next CD.

The Britannicas, an international band comprised of Aussie Joe Algeri, Yank Herb Eimerman, and Swede Magnus Karlsson, are known for their 1960s-inspired pop, and for covering The Byrds. They jump up a few decades on a new ringing version of “This Charming Man” by The Smiths. It’s available for free download on Algeri’s Bandcamp page.

Even though I’ve eagerly joined the hunt on Record Store Day held each April, I’ve yet to participate in the November Black Friday edition. That might change this year, after I heard WXRT DJ Terri Hemmert mention U2’s “Ordinary Love”/”Breathe” 10” vinyl record. You can find some of the other early Christmas presents that will be available (if you get up early enough on the day after Thanksgiving) on the Record Store Day website.