EP Review: The Safes - Thanks To You 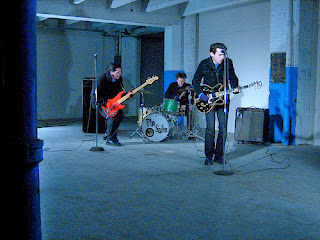 The Safes have covered a lot of ground since forming in 2003. In addition to releasing a number of CDs and EPs, the trio has landed songs on TV, ranging from reality shows on MTV and VH1 to Roadtrip Nation on PBS. The Safes continue to embrace variety on their new Thanks To You EP; exploring a different musical direction on each of the three tracks.

The EP takes its name from “Live Life Like You Wanna Live,” a celebratory number brimming with a sort of T-Rex playfulness. “It’s all brand new, and thanks to you,” the song notes, as drummer-guitarist-vocalist Frankie O’Malley, bassist-vocalist Michael O’Malley, and drummer-guitarist-vocalist Patrick O’Malley lay down a fun, easy-going vibe. “Good Is Gold” has a more swaggering sound that incorporates hard rock guitar, while the catchy and bare-bones garage rock approach The Safes take on “Game Changer” kicks off with androgynous vocals set to a steady drum beat.
The Safes will be performing at the 10th Annual Black Wednesday show with The Differents, The Phenoms, and Jet W. Lee at the Empty Bottle in Chicago on November 27th.
Posted by Terry Flamm at 9:53 PM