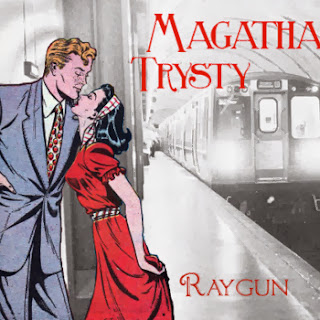 It’ll take some effort for Chicago-based band Magatha Trysty to top its 2012 full-length debut, Your Clothes Will Wear Themselves. The follow-up is due early next year, and judging from “Raygun,” a new single that’s now available on iTunes, Magatha Trysty has another winner on its hands. The song offers more of the inventive vocal interplay singer-guitarist Chris David and his wife, singer-keyboards player Catherine Louise perfected on Clothes, and moves to a catchy, energetic arrangement.

“Raygun” is akin to songs like “Art Zero” from Magatha Trysty’s debut in that its meaning isn’t entirely clear, even while reading the lyrics on the band’s website. “Shrugged off the teenage ennui,” David sings at one point. “Just not sure how to replace it.” Catherine Louise joins him on the chorus, as the duo creates a frenetic new wave vibe via give-and-take vocals.

One of the more elaborate passages finds Catherine Louise weaving her line, “No guts to use it, blow the dust off the raygun” around David’s repeated chant of “The hardest part of giving up is disappearing.” There’s a hint of R.E.M. in the melodic guitar strumming and cryptic lyrics. “Raygun” is an ambitious choice for a single, clocking in at over five minutes, but Magatha Trysty knows how to keep it interesting.
Posted by Terry Flamm at 9:59 PM