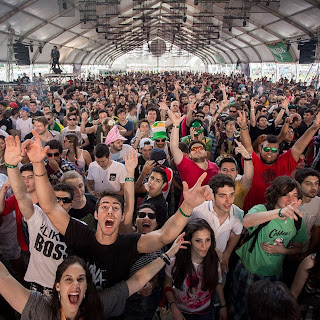 Lollapalooza hits Chicago today for its annual weekend bash, loaded with familiar names like The Cure, New Order, Smith Westerns, Thievery Corporation, Queens Of The Stone Age, The Killers, Lana Del Rey, Little Green Cars, Matt And Kim, Court Yard Hounds, The National, The Lumineers, The Postal Service, Mumford And Sons, Wild Belle, Tegan And Sara, Two Door Cinema Club, The Vaccines, Vampire Weekend, Beach House, Phoenix, and Cat Power. But there are also several lesser known acts worth discovering, if you only had the means to find out about them. Fortunately, there are publications for that.

Time Out Chicago has a Lollapalooza feature at its online site, and of course, there’s always the official Lollapalooza site.

Out of town people or those who couldn’t score tickets but still crave the Lollapalooza experience can tune into WXRT, which is once again devoting a great deal of airtime to the event. The Chicago FM radio station will feature music by Lollapalooza artists throughout the weekend and offer exclusive in-studio and after show performances. Marty Lennartz, host the weekly Big Beat alternative music show, will periodically give live reports from Grant Park.
Posted by Terry Flamm at 10:36 AM