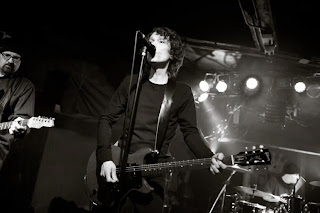 Photo of Kevin Lee And The Kings from the Kevin Lee Facebook page.

So once again I’ve been passed over to play the title role in the next Batman flick. I’ll just have to shake off the staggering disappointment and get on with this week’s Slumgullion.

The Downtown Palatine Street Fest is underway, and while I had every intention of checking out female rockers (three teenagers, one woman) Purple Apple and street festival veterans/recording artists Dot Dot Dot, a late night freelance assignment changed my plans. I was just getting off the train here in Palatine as Dot Dot Dot was wrapping up its set with a rendition of “Hey Jude.”

My wife Pam and I went to the Impressionism, Fashion, and Modernity exhibit at the Art Institute Of Chicago today, so I only was at the Downtown Palatine Street Fest long enough to parade past the WXRT booth wearing one of the station’s vintage diamond t-shirts. A worker at the booth snapped my picture, so I might show up soon on the XRT website.

I’m trying to finish this post in time to check out Cherry Poppin’ Daddies, who have the 10:00 PM slot in Palatine tonight. They’ve recorded a number of CDs and have achieved national success with their vintage swing and rock and roll music. On Sunday, teen rockers Selective Amnesia kick things off at 11:00 AM, followed by the teenage girl band Serendipity at 1:00 PM; 20-something, California-based singer Tiffany Alvord at 2:30; 7th Heaven, one of the more popular club bands in the area at 4:00; and Beatles tribute band, Brit Beat at 6:00 PM.

The guitar-driven power pop band Kevin Lee And The Kings have a gig next Saturday, August 31st, at Sylvie’s on Chicago’s north side. The set list will no doubt include songs from Lee’s most recent effort, the impressive, Breakout, which notched some positive comments earlier on this blog.

Atmospheric synth band Save The Clocktower, whose Carousel CD was also favorably reviewed here on BHT, recently announced it has a show coming up with Porcelain Raft at Schubas on September 12th. Here’s a video for “Like That,” a single released from the band’s 2012 CD, Through The Glass.

The Everly Hillbillies, a Chicago-based covers band led by Mike Cohen and Jeff Janulis of The Abbeys, are one of the acts participating in the 1st Annual Every Brothers & Family Get Together/Concert taking place on September 29th at the 3rd And Lindsley Bar And Grill in Nashville, TN. Other acts on the bill include The Folkups and Bill “Sputnik” Spooner, a  founding member of The Tubes. Concert promoters Turning Point Productions also promise, “VERY VERY, VERY special surprise guests.”

There Goes Improv Performin’ Simon. WXRT air personality Lin Brehmer and news anchor Mary Dixon were talking yesterday morning about musician Paul Simon showing up at Wrigley Field and later getting up onstage to do a song at the Second City comedy club. According to a Chicago Tribune online piece by theatre critic Chris Jones, the shorter half of Simon And Garfunkel spun some humorous tales and performed three songs.

There have been some recent additions to the Broken Hearted Toy Rock And Roll Library. I’m planning on covering all three of these books more extensively in the future, but for now, here’s a brief preview.

I bought a copy of Rubber Soul from rocker-turned author Greg Kihn at Fest For Beatles Fans - Chicago. His latest novel is set in the 1960s and includes The Beatles among its characters. I’m about about a third of the way through, and it’s fun and imaginative. I also picked up a copy of Clinton Heylin’s The Act You’ve Known For All These Years book about the Beatles in their prime. It’s not a new publiction—it originally came out in the UK in 2007—but it’s filled with fascinating anecdotes from Pete Towshend, Graham Nash, Andrew Loog Oldham, George Martin, and the Beatles themselves.

I just received a copy of college professor and PowerPop blogger Mary E. Donnelly’s long-awaited look at the power pop band, Shoes, Boys Don’t Lie A History Of Shoes. Freelance writer Moira McCormick assisted with the book. At 464 pages, it has loads of info, as well as commentary from several music industry related people, including Material Issue’s Ted Ansani and Mike Zelenko; International Pop Overthrow founder David Bash; writers Bill Paige, Cary Baker, Don McLeese, and Ira Robbins; musicians Ric Menck, Herb Eimerman, Mike Galassini, Jamie Hoover, Bill Lloyd, and former Shoes drummer Skip Meyer. Glancing through some of the pages, it looks like Donnelly was able to get informative and straight-forward answers from Shoes founders Jeff Murphy, John Murphy, and Gary Klebe. I interviewed these guys twice for the Illinois Entertainer, and there’s never a speck of hype or dishonesty in what they have to say.

Also, on the book beat, Cherie Colyer, a member of my writers group, has just released her second paranormal romance, Hold Tight, on Omnific Publishing. It’s the sequel to her emotionally powerful and engaging tale of teen witchcraft, Embrace.
Posted by Terry Flamm at 10:49 PM