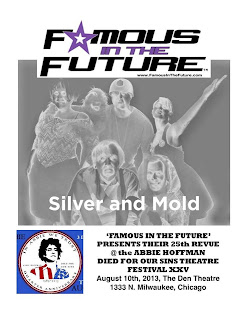 Long-time participants and fans alike must have wondered if the Abbie Hoffman Died For Our Sins festival would lose some of its in-your-face storefront allure with its move to The Den Theatre this year. Then there was the question as to whether regulars would follow Abbie from the Mary-Arrchie Theatre’s home base on north Broadway to its special, 25th Anniversary location on Milwaukee Avenue. If a quick visit to The Abbie last night is any indication, the results have been mostly positive.

Luckily, my fear that a late-night freelance obligation would keep me from not going at all last night didn’t come about, but it did delay my arrival enough to miss Mary-Arrchie Artistic Director Rich Cotovsky portraying Abbie Hoffman in the opening ceremonies. From there, it was a difficult decision to pass up Rush Pearson’s masterful one-man show, Diary Of A Mad Man on Stage 1, in favor of a rapid-fire quartet of of new plays on Stage Not 2B.

Jessica Wright Buha’s Gently Killing Grandma was a dark comedy deftly performed by five women from The Luha Group. Iguana Productions followed with John Weagly’s A Goose Without A Gander, a funny monologue fueled by its dynamic performer, about infidelity and the ill-fated title bird. Value Meal found two burly gentlemen from Big-Big! faced with the challenge of polishing off a line of Subway sandwiches while discussing their favorite food. Paper Bag Void was an entertaining, brief bit of philosophy that climaxed with audience members shouting their appreciation for Abbie Fest and popping paper bags.

Over on Stage 2B, where several bands will be performing this year, whitewolfsonicprincess cast a spell with Get Right With God; indie rock songs laced with  provocative spiritual imagery. Founding members Carla Hayden and James Moeller also front Black Forest, a theatre group with several years of playing the Abbie under its belt.

For the complete Abbie Hoffman Died For Our Sins schedule, check out the Mary-Arrchie Theatre website. Some of today’s highlights include a series of bands kicking off with Jungle Of Cities at 2:00 PM; Wild Dogs by Mary-Arrchie Theatre at 4:00 PM; The Two Character Play by Citizens Relief at 6:00 PM; Mixtapes by Black Forest at 8:00 PM; Twenty-FIF: Silver & Mold by my former comedy group, Famous In The Future, at 9:00 PM; and power pop band The Abbeys at 10:45 PM.
Posted by Terry Flamm at 1:42 PM