No Problem With The Handcuffs 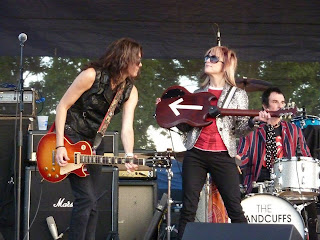 The catchy rock songs The Handcuffs have recorded over the course of three CDs came across loud and clear during a performance at Northalsted Market Days. Led by the husband and wife team of singer-guitarist Chloe F. Orwell and drummer Brad Elvis, the Chicago-based band has landed a number of songs on TV shows, and plays the local scene on a semi-regular basis. On Sunday, The Handcuffs opened with the energetic “Mickey 66” and continued at a relentless pace throughout the hour-long show.

A touch of glam and a consistently hard guitar attack mixed within classic pop melodies makes it challenging to slap a label on this four woman/one man quintet. Plus, chief songwriter Brad Elvis is pretty adventurous when it comes to lyrics. Orwell, a charismatic front person, acknowledged the predominantly gay Market Days crowd from time to time, and dedicated the provocative tale of cross-dressing, “Vinyl Isabella,” to “all the trannies in the crowd.” The song segued nicely into a bit of “Lola” by the Kinks, and The Handcuffs later offered a rollicking cover of Mott The Hoople’s “All The Way To Memphis.”

Otherwise, it was an impressive set of originals like “Miss You On Tuesday,” “Kiss This Goodbye,” “Dirty Glitter,” and “Jet Baby.” New guitarist Susie Q exuded the mystique of a western gunslinger as she powered each song, and broke free for some extended solos. At one point, Orwell instructed the crowd to chant Q! in the guitarist’s honor. Orwell also had some interactive fun during “Gotta’ Problem With Me?” As she sang, “You gotta a problem with me?”, the audience pointed at her and shouted “We gotta a problem with you!” It takes a lot of confidence to encourage a crowd participate that way.

The Handcuffs have been working in the studio on their fourth release. The two new songs performed on Sunday, “Keep Your Mouth Shut!” and “Fluffer” (I’m guessing at the titles) gave a strong indication that the band shows no signs of slowing down.

The Handcuffs rule and rock! Saw them in April and it's their best line-up ever! Can't wait for the new CD to come out.