Palatine Pops For A National Band 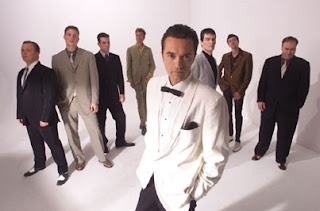 For the first time in a few years, the Downtown Palatine Street Fest will have a national band as its main attraction. In the past, it has been a kick having The Smithereens, Cracker, and Smash Mouth playing just five minutes away from my front doorstep. On Saturday, August 24th, the Eugene, Oregon-based Cherry Poppin’ Daddies will bring their highly animated take on swing era music to the outdoor stage in Palatine at 10:00 PM.

The eight-member band has released a number of CDs since 1990, the latest being White Teeth, Black Thoughts, which dropped this past June. Fans of The Brian Setzer Orchestra are sure find a lot to like about these guys. Here’s a clip of Cherry Poppin’ Daddies performing “Zoot Suit Riot” on The David Letterman Show.

The Downtown Palatine Street Fest kicks off at 5:30 PM on Friday with the band Old School, the first of 17 acts scheduled for the weekend. Next up is Purple Apple, a quartet comprised of three teenage girls and a woman drummer, that has been getting attention on the Chicago club scene. The coed synth band, Dot Dot Dot, has become one of Chicago’s busiest street fest acts through an eclectic selection of cover material and originals, as well as its fun ways of engaging an audience. Serendipity, another teenage girl band that has quickly made a name for itself, has the 1:00 PM Sunday time slot, and the Beatles tribute band Brit Beat wraps things up at 6:00 PM. For the full schedule, check out the Downtown Palatine Street Fest website.

In addition to the bands on the main stage, popular children’s music artist Ralph Covert from Ralph’s World will be performing at the Mariano’s Kid Zone in the Town Square at 3:00 PM on Saturday. Food vendors include Artistic Cuisine, Brothers’ Ribs, Mexico Uno, Photos Hotdogs, and Siri Thai. Also, the Durty Nellie’s, Mac’s On Slade, Lamplighters, and Emmetts Brewing Company restaurants are within walking distance. So come out to Palatine this weekend. The more people who show up for the Downtown Palatine Street Fest, the more likely it will be that we’ll have another national act headlining next year.
Posted by Terry Flamm at 11:06 PM