Hats Off To Del: A Tribute To Mr. Shannon 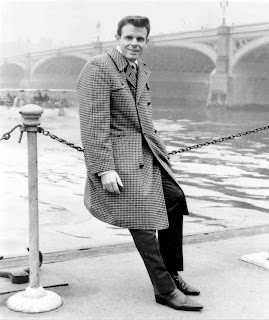 Del Shannon having a jolly good time in London. Photo from the official Del Shannon website.

When author Bruce Spizer was a guest speaker at Fest For Beatles Fans - Chicago a few weeks ago, he talked about how well American singer Del Shannon got along with The Beatles while touring across England with them back in 1963. Shannon recorded a version of their song, “From Me To You,” which actually sold more copies than the original on the U.S. charts. (The Beatles still hadn’t broken over here yet.) Still, he is probably best known for hit singles like “Runaway” and “Hats Off To Larry.”

Now comes word of the Del Shannon Tribute - Songwriter Volume 1 CD, which will feature power pop covers of his songs. Contributing artists include Marshall Crenshaw, Frank Black from The Pixies, The Britannicas, The Rubinoos, Nash Kato from Urge Overkill, Marti Jones, Randy Bachmann, and a duet from Carlo Olson and Peter Case. The Del Shannon Tribute - Songwriter Volume 1 Facebook page has posts and videos regarding the various artists involved, and promises the CD will be released soon. All profits will be donated to the Del Shannon Memorial Scholarship Fund for helping young musicians.

This is such an awesome line-up of Del Shannon fans coming together to pay tribute (and for a cause). Hats off to the people who made this happen