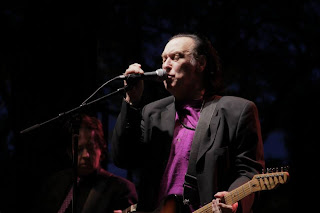 Cooler than average temperatures last Saturday didn’t affect the turnout for Taste Of Lincoln Avenue, where Dave Davies was one of the night’s headline acts. The former Kinks lead guitarist is currently touring in support of his latest solo effort, I Will Be Me. There are several guests on the CD, including The Jayhawks, Anti-Flag, Oli Brown, Chris Spedding, and The Jigsaw Seen.

Guitarist Jonathan Lea, drummer Teddy Freese, and bassist-keyboards player, Tom Currier from The Jigsaw Seen, a band that has contributed tracks to several tribute albums (Bee Gees, Hollies, Left Banke, etc) in addition to recording their own material, are touring as Davies’ backup band. They joined him on several songs from his old mates and a smattering of his solo stuff. Opening with “I’m Not Like Everybody Else,” he immediately hooked the crowd with the rough hewn charm of a guy you’d enjoy chatting with in an English pub.

Davies employed a more talkative singing style than his brother, lead vocalist Ray Davies did with The Kinks, but he definitely got the job done. And what a kick to see the lead guitarist who played such a pivotal role in a band that most critics agree changed the course of rock music with its witty lyrics and aggressive instrumentation. The guitar power Davies unleashed on Saturday was all the more impressive considering he had to re-learn how to play the instrument after suffering a stroke in 2004. It was the second recent opportunity for Chicagoans to see a musical legend at an outdoor festival. Robert Plant performing at Taste Of Chicago was the other.

Davies played the very Kinks-like “Little Green Amp” from I Will Be Me, and dedicated another new song, “The Healing Boy,” to his grandson. The smile on his face when he sang the line, “He’ll fill your heart with joy” was genuine and touching. “Death Of A Clown,” the solo single that charted in the UK for Davies, got an added boost when he invited a woman named Barbie from the audience to come up on stage and sing with him. Otherwise, he seemed to stick with songs by The Kinks. He dedicated “See My Friend” to John Entwistle, noting that the Who’s bassist had passed away exactly 10 years earlier. Introducing an acoustic version of “Young & Innocent Days,” Davies jokingly complained that Ray Davies has never dedicated a song to him. “But I’m going to dedicate this to my brother Raymond,” he said graciously.

Along with his backup band, Davies paid tribute to the classic rock he and his brother created over the years with energetic takes on “She’s Got Everything,” “Where Have All The Good Times Gone?”, “Living On A Thin Line,” “Tired Of Waiting,” and “All Day And All Of The Night.” They returned for a reprise of “I'm Not Like Everybody Else” before tearing into an extended take on “You Really Got Me” that featured some spirited jamming. A few audience members singing “Lola”—hoping to get Davies to perform it—were left feeling disappointed. (Ray Davies didn’t perform it at a show he did at Grant Park a few years back, either.) But even without “Lola,” it was an evening that delivered on its promise of essential rock and roll.
Incidentally, while doing research for this post, I came across Elliot Cohen’s review on the examiner online site of a Dave Davies performance at City Winery in Manhattan. It makes for some interesting reading.
Posted by Terry Flamm at 10:16 PM