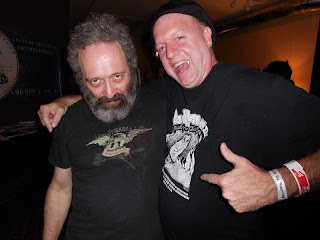 The Mary-Arrchie Theatre celebrated the 25th Anniversary of its three-day performing arts celebration named in honor of the late Yippie leader Abbie Hoffman this past weekend at The Den Theatre. On Sunday morning there was an informal reading from Hoffman’s Steal This Book, but otherwise, the tone of the event was more creative than revolutionary. A Facebook message posted by Mary-Arrchie Theatre yesterday neatly summed up the positive vibes generated at this year’s Abbie Fest, and expressed the hope that feeling will exist year round within the Chicago theatre scene.

“Remember throughout the year the spirit of the Abbie Hoffman Died for Our Sins Theatre Festival. It’s about cooperation, not competition. Live that in everything you do this year. Our sincerest thanks to everyone who performed, attended, or worked the fest this year, you are the best!”

Bringing local performers, writers, and directors closer together has been one of Mary-Arrchie Artistic Director Rich Cotovsky’s major goals since the first Abbie Fest took place in 1989. And it worked just as well in the more expansive space at The Den Theatre as it always has at the Mary-Arrchie’s home base at the corner of Broadway and Sheridan Road. The action was in full swing when I dropped by for a second visit on Saturday evening. The bar area was filled with performers and the people who had come to see them. At times, loud conversations bled into Stage 1 (just as music from the bands playing on Stage 2B could occasionally be heard during the plays on Stage Not 2B) but it felt more like a festive ambience than an intrusion.

Abbie Fest veterans Citizens’ Relief brought their usual engaging stage presence to the cryptic Tennessee Williams work, The Two Character Play. No matter what piece they choose—and they always aim for the offbeat—these two performers are fun to watch. Carla Hayden and James Moeller of Black Forest are also long-time participants with a knack for compelling forays into the avant garde. For Mixtapes, Hayden and Moeller were joined by a dancer who brought her own charm and talent to the production. The three women of Mudgeonsoul Productions brought a sharp edge to Liz Siedt’s gothic comedy, Rebecca Back To Life.

Which brings us to Famous In The Future, and even though I performed with this comedy group for 20 years, I’m going to once again toss aside journalistic integrity and critique their Twenty-FIF: Silver And Mold revue. FIF, the only group other than the Mary-Arrchie itself to have appeared at every single Abbie Fest, experimented with a few new concepts for their silver anniversary. Having a musician play guitar and sing between skits worked well, as Jason Weinberg immediately endeared himself to the audience and had them singing along with his versions of well known rock songs.

FIF opened with a puppet representing Cotovsky’s Swami character in Gas Mask 101, and Abbie Fest regulars loved it. Later, FIF did an amazing job bringing two stuffed bears to life, but the skit didn’t have a strong enough payoff. Some of the better material included a song about an ugly flower, and a hick who claimed to have filmed Jesus visiting his trailer park. Not all the bits were gems, but Famous In The Future is still funny and imaginative after 25 years.

Unfortunately, I had to leave Saturday night before The Abbeys played on Stage 2B, and that was the band I most wanted to see. I returned early Sunday morning and caught two shows that exemplified the Abbie Fest spirit. Cotovsky was in his element as Rex the crazed loner in Matt Borczon’s Wild Dogs. I’ve seen Cotovsky eat a Twinkie off the floor in the opening scene at least 20 times, but he always makes this comic/tragic play a kick to watch. Afterward, Cotovsky gathered some of the younger Mary-Archie staff members together on Stage 1 to take turns reading out loud from Abbie Hoffman’s Steal This Book. The author’s rebellious spirit rages on 25 years after his death, thanks to this freewheeling annual festival.
Posted by Terry Flamm at 11:12 PM